Why the 5-spot remains a center of concern for Celtics 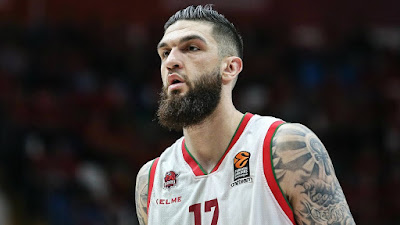 There are a few things I am concerned about with 2019-20 Celtics roster, as the regular season is just two moths away.


When it comes to the point guard slot for the C's, newly-acquired Kemba Walker is a proven star at the position and I have total faith in Marcus Smart to play that role, and I wouldn't be surprised if we saw rookie Carsen Edwards pick up some minutes at the one as well.

How about wings? The Celtics have plenty of those - Gordon Hayward, Jayson Tatum, Jaylen Brown, Daniel Theis, rookie Grant Williams and Smart in certain situations. The wing lineup should project somewhere between solid-and-terrific.

We know the players Boston has brought in at the center position, but what we don't know is how they'll project in Brad Stevens' offensive and defensive schemes. None of the current Celtics centers have Al Horford's package of 3-point shooting, defense, passing and overall versatility. If we watched highlight reels of Vincent Poirier, Enes Kanter or Robert Williams III, we would see points on lobs, dunks and put-backs - with an occasional blocked shot on the defensive end.

No one from that center trio could be labeled as a defensive whiz, assist-artist or a dead-eye shooter from deep. We know Kanter will score in the paint and rebound, as will Robert Williams, but with the added attraction of his shot blocking. French big man Poirier remains the major question mark, as he could either turn out to be a major flop or a significant contributor once he gets the hang of the NBA game.

Theis is another possibility at the center spot and in his two seasons with Boston, he has - in limited minutes - shown himself to have the versatility Stevens looks for offensively. He can also rebound, battle down low, defend the perimeter and hit the long ball, while he has struggled a bit against the bruising big men, he can work on that part of his game. Theis has done well this summer in World Cup exhibitions. With the Celtics roster changes he could be used as an occasional small-ball five, but improvement over the course of the season could see him in the starting lineup.

Rookie Grant Williams is also an option, but similar to Theis, he lacks the length of traditional centers, but against certain teams he might fill in at the five-spot. One thing is for sure, Brad Stevens can no longer be reticent about experimenting with various combinations. He should take a page from Don Nelson's book on innovative lineups, and not pass up on the idea of a 6'4" Marcus Smart filling in at the center spot briefly on occasion. He's a physically-strong, low-center-of-gravity, good-wingspan (6'9.25") guard that could make it work at times. Preposterous you say? I think not.