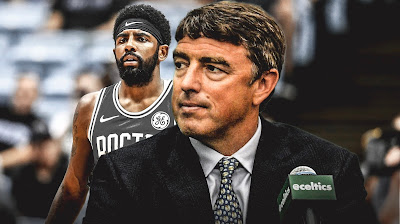 You can now also count Wyc Grousbeck as a part of the Kyrie Irving fan club, despite how things ended in Boston for the now Nets' All-Star.

The Celtics owner made an appearance on WEEI's "The Greg Hill Show" Tuesday morning to talk about the state of the team following the departure of Irving.

It has become clear over the last few weeks that Irving reportedly grew unhappy at some point during the 2018-19 campaign, especially towards the end of the season. Grousbeck confirmed that those reports were true.


"Well it just wasn't a general era of happiness around the team at the end," Grousbeck said. "You know, he just sent me a text the other day out of the blue and it was a really thoughtful and nice text, lengthy text kind of, and I responded and we had a nice back and forth. I mean that doesn't always happen with players, and he's a guy that wants to have a good relationship."

While some Celtics fans won't agree that Irving was a great locker room presence, Danny Ainge, Marcus Smart and now Grousbeck have all said positive things about Irving.

Grousbeck even went as far as to say that both the Celtics and Irving have no ill-will towards each other.


"We do have a good relationship, he and the Celtics organization have a positive relationship. We wish him kind of the best, except when he's playing us," he added. "But he's a good guy, he tried hard, he gave us two years, and we're going to move forward."

Clearly no bridges have been burned just yet, but the Celtics owner did touch upon the future, which includes the signings of All-Star Kemba Walker and big man Enes Kanter this offseason.


"Kemba is a phenomenal player- 25 points a game last year, I think he's a three-time All Star, and just a great person. A glow, you know, an aura, of positivity, and he’s super excited to be here," Grousbeck said. "He chose us, he had multiple other places he could've gone. He wanted to talk about the banners and a ring and what they look like, and how it feels to be a Celtic. He's super excited."

"Then Enes Kanter chose us. (He) had bigger offers elsewhere, more money elsewhere, but you know, chose us to come play for Brad and to really have a meaningful role on a good team," he added.

So far it looks like all the unhappiness might be all but gone from the Celtics’ locker room for the upcoming season.

Click here to listen to the full of Grousbeck interview.