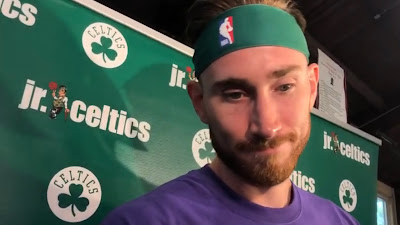 Gordon Hayward is entering his third year with the Celtics, the first healthy offseason in Boston since signing a max-deal.

Hayward, 29, is enjoying a full summer of workouts as he's nearly two years removed from the left leg injury that sidelined the Celtics forward for the 2017-18 campaign. He spoke to the media on Wednesday during the Jr. Celtics all girls basketball camp as part of the "Her Time to Play" national initiative at the Tobin Community Center in Roxbury, Boston.

While hosting basketball clinics with his wife Robin, Hayward gave high praise to the Celtics coaching staff for all they have done for him during the offseason.


"When the offseason comes the coaches need to get away too and get a bit of a break, but I’ve been thankful that they’ve been in the facility and really working with me," said Hayward, per The Boston Globe’s Adam Himmelsbach

Gordon Hayward said the most unique part of his summer training has been having so many Cs coaches around. "When the offseason comes the coaches need to get away too and get a bit of a break, but I’ve been thankful that they’ve been in the facility and really working with me."
— Adam Himmelsbach (@AdamHimmelsbach) August 28, 2019


Hayward had an up and down 2018-19 season for the Celtics, while averaging 11.5 points, 4.5 rebounds and 3.4 assists in 72 games, mostly off the bench. For a player like Hayward to take the initiative and for the coaches who saw that it would be well worth the extra work to see the Celtics forward have the type of season most have been waiting for since he first arrived in Boston two summers ago, these past offseason workouts at the Auerbach Center should be nothing but beneficial for both parties.

While the Celtics may not be considered contenders this upcoming season, don't let C's new-comer and former Jazz teammate Enes Kanter say otherwise, especially when it comes to Hayward looking like the player of old.


"When I was in Boston, I played with (Hayward) in two-on-two action and I feel like he's gained more confidence," Kanter told Jared Weiss of The Athletic. "When he played, he wasn't scared of anything."

If the Celtics are going to make in impact in the Eastern Conference this season they're going to need All-Star Hayward to come back and by the sound of it, he might not be that far behind.