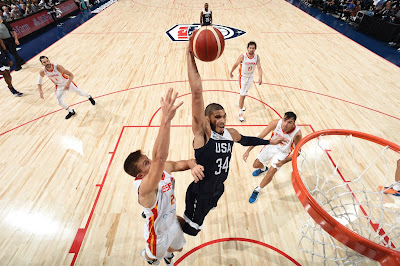 Team USA wrapped up another week of training camp with a 90-81 exhibition win over rival Spain on Friday night at the Honda Center in Anaheim, California.

It was a much more balanced showing on both ends of the floor for Team USA, who continues to prepare for the FIBA World Cup, which is two weeks away.

In the team's first international friendly, four players scored in double-figures including the Celtics duo of Kemba Walker (11 points, 8 assists and 6 rebounds) and Jayson Tatum (11 points, 5 rebounds and 4 assists), while Jaylen Brown added 9 points on 4-of-5 shooting from the field in nine minutes off the bench.

Walker once again was the starting point guard for Gregg Popovich and was asked afterwards if this win proves the naysayers wrong, despite many NBA stars having dropped out before the start of training camp and losing to a select team mostly of G-Leaguers earlier in the week.


"We don't care about the outside noise," Walker said to Jared Greenberg of NBA TV. "Right now we're just focused on the guys who are here, man. We're working hard to get better each and every day. Tonight we showed it. We played really well against a really good team and that was a good win for us. Hopefully our confidence keeps going up and we keep getting better."

Spain trailed almost the whole night, while Marc Gasol led the way with a game-high 19 points on 7-of-13 made field goals and 3-of-3 from behind the arc. Ricky Rubio finished with 16 points, 7 assists and 5 steals in the loss.

Tatum continued to stay aggressive on the offensive end, taking the ball to the hoop, while Brown got to the paint with ease, as he rebounded from a sub-par performance in last week's scrimmage in Las Vegas to keep his chances alive of making the final 12-man roster.

Marcus Smart sat out again with a sore left calf, but it's been confirmed that he did travel with the rest of the team to Australia, where they'll play a few more tune-up games against the home country (August 22 and 24) and Canada on August 26, before final cuts are made.

Popovich still has 14-players and will have to make a decision on which two are going back home after PJ Tucker's withdrawal from the team due to an ankle injury sustained on Thursday.

The FIBA World Cup begins on August 31 in China.

You can watch highlights of Team USA's win over Spain below: