ESPN projects 2019-20 Celtics to finish second in the East 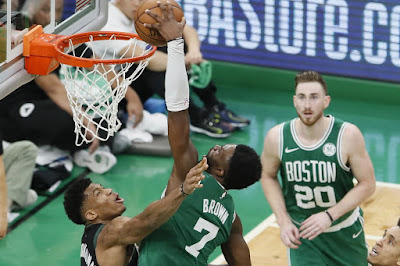 While the Celtics may have taken a step back on paper as far as talent, it doesn't mean that it will show on the court this year, according to advanced analytics.

ESPN’s Kevin Pelton has released his yearly NBA projections for the 2019-20 season via the four-letter network's Real Plus-Minus or RPM analytics report. Despite the Celtics loosing two All-Stars in Kyrie Irving and Al Horford, they remain just a hair behind where they were projected last summer.


Pelton projects the Celtics to finish with 47.4 wins and as the second seed in the Eastern Conference, ahead of the Philadelphia 76ers (projected to come in third with an even 47 victories) and three off from the East leading Milwaukee Bucks (the only team last season to achieve 60 wins) at 50.

Boston, who finished the 2018-19 campaign winning 49 games, could still remain a top team in the league despite the setback due to the roster being more even on both ends of the floor this season.


"The Celtics are one of four teams projected by RPM to rank in the top 10 in both offensive and defensive rating, something they quietly pulled off last season despite underperforming expectations. With the departures of Aron Baynes and Al Horford, defense could be the greater challenge, but Boston has strong defenders on the perimeter, led by NBA All-Defensive first-team pick Marcus Smart."

It remains to be seen how the Celtics four rookies will mesh in Brad Stevens' system, but history has shown that the C's coach tends to get the best out of his younger players and they usually succeed beyond expectations. However this metric still doesn't take team chemistry and or other intangibles into account that simply can't be measured by numbers.

However, with the East and the rest of the league being as wide open as it's ever been over the last decade, this current version of the Celtics can easily surprise the basketball world. Honestly, it can't get any worse than the disappointment that was last season.