Kemba Walker on Celtics teammates: 'They're easy guys to get along with' 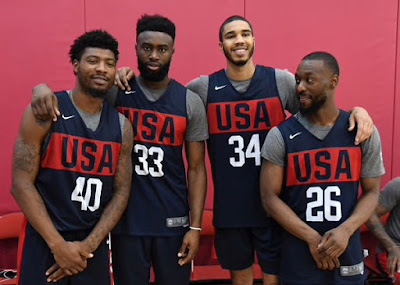 One of the many words thrown around during the 2018-19 campaign for the Celtics was chemistry. Last year's roster didn't always seem like a cohesive unit on the court. The arrival of Kemba Walker this summer might be just what Brad Stevens needs to turn things around in the upcoming season.

Walker seems to be showing early signs of being a great teammate, as he has already begun to bond with some of his new Celtics teammates. The All-Star point guard is one of four C's players invited to Team USA training camp, ahead of the FIBA World Cup.

Walker was asked by ESPN about how its been getting to know Marcus Smart, Jayson Tatum, Jaylen Brown, and if they have developed any sort of chemistry, yet?


"No question," Walker said. "Those are some good dudes right there. I already had a chance to spend time with JT. Me and Jaylen spent some time a few years ago in Africa, so we already knew each other a little bit, but Smart -- they're just easy guys to get along with. I'm an easy guy to get along with. So, it's been like we knew each other for a while at this point. But you know, we're getting comfortable. I'm getting comfortable for the most part each and every day with those guys."

Walker and Tatum led Team USA in a 97-78 scrimmage win on Friday night in Las Vegas, as the Celtics duo looked pretty comfortable in their short time on the court together. Though Brown didn't have it going offensively, he did start alongside Walker in the backcourt, while Smart did not play due to soreness in his left calf. So far the C's quartet have survived the first round of cuts and training camp will resume on Tuesday in Los Angeles.

If all four Celtics teammates make the final 12-man roster for Team USA, it would be a clear advantage for Stevens and his coaching staff come training camp and preseason when it comes to his new roster building team chemistry, especially if Walker continues to get along with Boston's up and coming young stars.