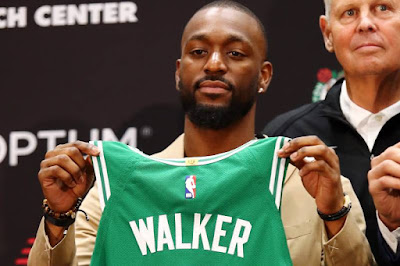 For All-Star Kemba Walker, deciding to sign with the Celtics wasn't easy.

He spent his entire eight-year career in Charlotte, but when it came to making a decision on heading to Boston it ultimately came down to winning. Walker told reporters after he was introduced, winning consistently is what he's looking forward to most in Boston and that it was ultimately time for him to leave the Hornets and play for head coach Brad Stevens alongside a core of players and a direction of an organization he truly believes in.


"It really came down to my happiness and how I want to compete night in and night out," Walker said. "I gave that organization everything I had every single night. My time was up there, I'm ready to start a new chapter."

Walker went on to explain how important it is for him and head coach Brad Stevens to develop a strong relationship -- something he says he's looking forward to this upcoming season. He's also excited to see his relationships with various teammates blossom, he mentioned Jaylen Brown and Gordon Hayward as two players he already had ties to prior to arriving to Boston.


"I'm easy to get along with," Walker said. "I've known Gordon for quite some time now. Jayson, we got back from Paris, we were both together -- he just signed with Jordan Brand, so we spent some time together. I know Jaylen Brown as well a little bit. We went to Africa a few years ago so we kind of built a relationship. I've been seeing a few guys around here. It will be easy for me to get along with everybody."

The three-time All-Star can't wait to get started. Walker cited how Stevens' point guards typically succeed with him at the helm, he smiled and talked about how much his new head coach has an eye for detail when it comes to studying film and constantly learning.