Marcus Smart is out indefinitely for Team USA 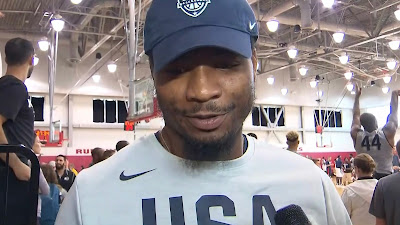 Marcus Smart sat out of Team USA's practice on Wednesday with a sore left calf and will not participate the remainder of training camp in Las Vegas, according to Marc Stein.

Smart is still expected to travel with the team to Los Angeles next week, when Team USA resumes camp on August 13, as the he will be re-evaluated by trainers and medical staff. The Celtics guard removed himself from practice on Tuesday after experiencing soreness in his left ankle, merely as a cautionary measure.


"Right now, for me, I’m trying to grow as a player... taking those precautions," said Smart. "Last year, or two or three years ago, I probably would have still been out there trying to fight through it. It's nothing serious so we just want to make sure it doesn't turn into anything serious."

Smart sat with Kyle Lowry, who's also rehabbing a thumb injury, while Team USA scrimmaged against a select team following workouts at the UNLV campus. Team USA will wrap up their four days of workouts in Las Vegas on Thursday before an inter-squad scrimmage on Friday night at T-Mobile Arena.


Marcus Smart in sweats watching from end of the bench next to Kyle Lowry. pic.twitter.com/6Y8hSEQnCZ
— Chris Forsberg (@ChrisForsberg_) August 7, 2019


Smart, who is determined to fight for a spot on the team's final 12-man roster that will head to China for the FIBA World Cup at the end of the month, hoped to return to the court by Wednesday. Team USA's assistant coach Steve Kerr called Smart one of the best players during the first two days of practice.