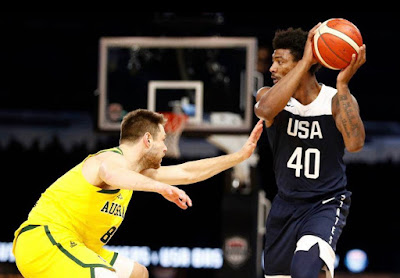 Team USA Coach Gregg Popovich has made the final cut to the roster that will head for China in FIBA World Cup competition. Kyle Kuzma was the final casualty, leaving the team reportedly because of an ankle injury.

So barring any new injuries or unexpected occurrences, the Celtics' Kemba Walker, Jaylen brown, Marcus Smart and Jayson Tatum, dubbed as "Team Shamrock," will represent the United States in FIBA tournament. Many analysts felt that Smart would not make the cut due to his calf injury, but he was in action during Saturday's 98-94 loss to Australia, scoring seven points in nine minutes, and adding one rebound and three assists. A little rust was evident as his moves appeared somewhat tentative, but his play was solid.

Jaylen Brown's status with USA Basketball seemed in jeopardy after his quiet showing in an intrasquad scrimmage, but he has looked good since, scoring eight points Saturday on perfect shooting from the field and beyond the arc. His size and versatility will be needed in China. Walker and Tatum have seemed like locks for the final roster from the beginning.

Popovich doesn't mince the few words that you hear from him, and he certainly is not hesitant to make decisions. The fact that he sees such value in these four guys in green is such a positive sign. With most NBA superstars opting to sit this one out, filling the roster with the best overall players had to be difficult for Pop.


“When you care about somebody, when you love somebody, you have empathy for somebody, things go better.

We go to dinner without phones and people actually talk to each other, ask questions and learn about how each other grew up; that sort of thing.”

Popovich is one of the most-respected coaches in the league and has been around for a long time. His Spurs teams always seem to be in the fight, even when the roster frankly hasn't seemed all that good. The fact he chose to retain all four Celtics players on Team USA is simply a great sign for the upcoming season. And the bonus is that newly-acquired Kemba Walker gets that chance to take the floor against some solid competition with his three new Celtics teammates. Add Gordon Hayward to Pop's four C's on Team USA, and you have the core players in Brad Stevens' schemes. That foursome already has an early start to Boston's training camp next month.