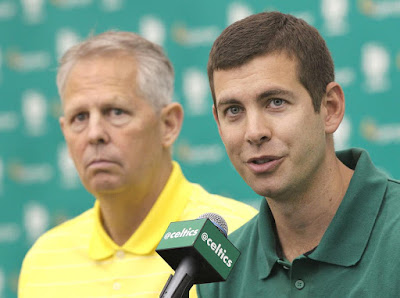 Just hours after the 2017 NBA All-Star Game, one of the biggest (and most notorious) superstars in the NBA was traded for a price that amounts to a used bicycle with no tires.

The man they call DeMarcus 'Boogie' Cousins was dealt by the Sacramento Kings after a tumultuous seven-year stint in Sacramento to the New Orleans Pelicans for rookie Buddy Hield, former King Tyreke Evans, NBA journeyman Langston Galloway, and the Pelicans first and second round picks in the 2017 draft.

While the deal looks to be a runaway steal on paper, many will argue the off the court (as well as the on court) issues of Cousins is what ultimately drove the player out of town and for a reduced price tag that can be argued is well below market value. Celtics fans on the other hand, should be wondering where their beloved “Trader Danny” and up and coming “star” coach were when one of the game’s premier talents was available for the taking.

The Boston faithful have been told for the better part of a decade that the front office has been working to secure talent and significant improvements to help the Celtics get back on top of the Eastern Conference. But with a player of Cousins stature being moved for pennies on the dollar, one has to wonder where they think this talent is coming from?

Boston was rumored to have had interest in the big man for years now but have been waiting for the asking price to get down to a reasonable level. Needless to say, they missed the memo that Cousins was pretty much being given away.

The Celtics now are left wondering what else may be available in the market and have been since connected to Phoenix Suns reserve forward P.J. Tucker but that will hardly ease the pain of missing out on a consensus Top-10 player (on pure talent) in the NBA.

Here are the two biggest issues I have with the missed opportunity to trade for DeMarcus Cousins:

With the price New Orleans paid to secure one of the top players in the game, one has to wonder what that deal would have looked like had the Celtics made it. Theoretically, let’s say the Celtics offer the Nets first round pick in 2018 and their own 2018 first round selection as well as Avery Bradley and Tyler Zeller. Does Sacramento make the deal?

Regardless, expect the deal would have been something in that ballpark and would have left Boston with assets like Marcus Smart, Jaylen Brown, and the highly coveted 2017 Nets first round pick still in their possession. We can all agree that Boston would still have a good amount of talent and assets left over even if they made this theoretical deal with Sacramento.

With that said, why couldn't Boston have used the remaining assets to make another massive deal and secure a player like (Oh I don’t know) Jimmy Butler from the Chicago Bulls for the Nets first rounder and the remaining assets the Bulls want in return? Would a lineup of Isaiah Thomas, Jimmy Butler, Al Horford, and DeMarcus Cousins not be in contention for an NBA Finals appearance?

Seems like Danny Ainge and the Celtics were thinking too small this time around and it may cost them big time.

Early rumors as to why Boston didn’t make a deal that would have landed Cousins have been that Celtics Coach Brad Stevens wasn’t inclined to work with the 'difficult' superstar. His well-documented issues both on and off the court were a major turn off and Stevens felt the cons outweighed the pros for the former King.

While Stevens isn’t wrong about Boogie being a pain, to pass on a Top-10 NBA talent shows the naivety of the young coach. Stevens' inability to understand how hard it is to secure those types of talents (not to mention finding a way to coach them) is the key to being a successful NBA Finals contender… or not.

While we all love what Brad Stevens has done as the coach of the Celtics, this type of nonchalant passing on proven NBA superstar proves the young coach isn’t understanding what an NBA coach’s role actually is in this day and age. You coach the talent you are given to the best of your abilities while building a system that helps utilize the best skills your players have. While Danny Ainge seems to have forgotten that his job is acquisition of said talent in the most cost efficient and beneficial way possible.

At the end of the day, if it is found true that Brad Stevens and Danny Ainge did have the chance to add DeMarcus Cousins for a similar deal to what the Pelicans ultimately settled on with the Kings, this could be a date to keep in mind for as to when the Celtics ‘rebuild’ started to go south.