Jaylen Brown out until after All-Star break with hip injury 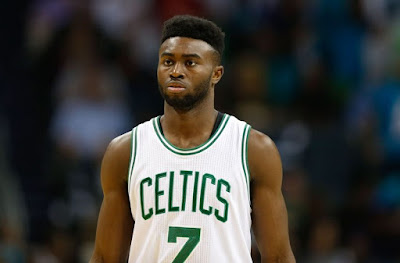 Call it a roulette wheel or just Deja Vú when it comes to the Boston Celtics' disabled list, but the injury bug has struck again. The latest victim is Jaylen Brown to join the club of missing games for Brad Stevens.

According to MassLive.com, Brown suffered a hip-flexor injury in the Celtics win over the Utah Jazz on Saturday night. Stevens stated the rookie would miss the last three-games remaining before All-Star weekend, and more than likely could miss significant time after the break.

The first year forward was inserted into the starting lineup for the last nine consecutive games, where the Celtics were 8-1, and just was starting to grow into his own before experiences his first setback of the season.

Avery Bradley, who Brown was starting for, hopefully makes his return after the All-Star break from his right Achilles injury. Though no time-frame has been established on when Bradley will come back.

Brad Stevens says Avery Bradley is feeling about as good as he's felt, but no new sense on timetable.
— Adam Himmelsbach (@AdamHimmelsbach) February 13, 2017

Marcus Smart will remain in the starting line-up for Brown, as Jae Crowder, who's been out for personal reason for the last two games, will start against the Mavericks on Monday night.

Oh, did we mention that Gerald Green (illness) is also questionable when Boston rolls into the American Airlines Center in Dallas?

The way I see it, with Jaylen Brown out of the lineup and Marcus Smart a starter, the bench has to step up for Brad Stevens in the next three games to finish the 'first half' of the season strong.

The Celtics are in second place at 35-19 and 2.5 games separate them and Cleveland for the best record in the Eastern Conferance

This week should be interesting for the coach of the East All-Stars.