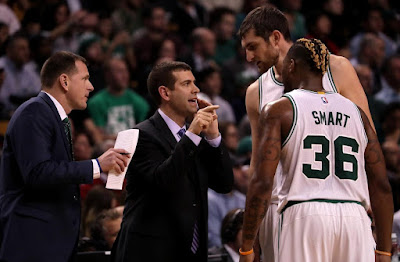 After clinching the second-best record in the East, Celtics coach Brad Stevens and his coaching staff have earned the right to coach the Eastern Conference All-Star team.

The Celtics' 113-107 win over the Lakers put them 2.5 games ahead of the Wizards, while only two games separate the C's from first place.
Stevens becomes the sixth Celtics coach to ever coach the Eastern All-Star team, the first since Doc Rivers' coaching staff in 2011.

Although Cavaliers coach Tyronn Lue, who holds the best record in the Eastern Conference, should be coaching the Eastern All-Stars, he couldn't be cause of the NBA rule that disallows coaches to make back-to-back appearances at All-Star games.

The Celtics held onto the second-best record in the East before the deciding Feb. 5 deadline.


"It should be Ty Lue," Stevens said. "But the way the rules work then it's the next-best record because he did it last year.

"But what's nice about it is, there's no politics in it. There's no subjectivity. It's what your team has accomplished. And that's a credit to the players in the locker room. You know, it's almost a little bit, I almost, feel bad that I'm the one that's going. I'd rather have another one or two of my guys (the players) playing in it. But our staff's kids will really enjoy it. And we'll go from there."

Stevens was quick to credit his players for putting him in a position to succeed and explained how it takes hard work from talented guys in order for a coach to be successful.


"I think none of us (coaches) are crazy enough to think you get there without really good players, and the players certainly carry the coaches," Stevens explained. "That's been the way it's always been. But with regard to the staff, I think our staff works really hard. I've said before that I've tried to prioritize hiring humble, hardworking and intelligent people. And they come every day, they work really  hard, they do a lot behind the scenes, they put in a lot of time and effort, and so it's nice that they're going to be a part of that as well."