Pierce regrets not ending his career with the Celtics 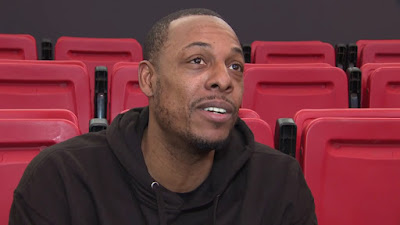 Paul Pierce is in Boston for one last go around as a player, and if he had it his way, he'd still be in Celtics green enjoying his final season in the NBA. But unfortunately as Celtics fans have learned over the years, it never quite works out the way you envisioned them to work out, especially when it comes to sports in general.


"Always wished I ended my career with [the] Celtics," says Pierce

'The Truth' opened up about a plethora of topics during a candid Q & A session with local media after the Clippers practice at Northeastern University on Saturday afternoon. Pierce is preparing to play his final game at the TD Garden when Los Angeles takes on the Celtics on Super Sunday.

Pierce, who played 15 seasons in Boston, has made it a point to tour the city since the Clippers arrived on Friday. As evident through his Facebook and Instagram accounts, he's clearly been enjoying the likes of New England clam chowder and Fenway Park among other things.


"I had a chance to ride around the city," said Pierce. "I'm just soaking it all in."

Pierce was asked about current Celtics All-Star; Isaiah Thomas, who he called on Friday a 'championship-type player,' he elaborated on his comments.


"Easily the best point guard in the East," Pierce stated without hesitation "He's doing it, it's fun to watch. [Thomas] is coming into his own, he's figured it out...the game looks easy for him."

Of course the Boston media couldn't let Pierce leave without getting his take on the Super Bowl, which he will be watching on his flight to Toronto.


"This is a huge game, but it's the Patriots," said Pierce with a chuckle. "I'm pumped up for this one, you can already see the city gearing up."

The New England Patriots and Atlanta Falcons kick-off a little under two hours after the conclusion of the Celtics and Clippers.

To view these extended Paul Pierce media clips and others, including his thoughts on an emotional farewell to the Garden faithful and about possibly taking a job with the Celtics front office in the future, click here