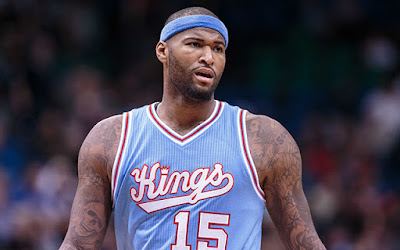 New Orleans enjoyed their third NBA All-Star Weekend in the last nine-years, while Anthony Davis not only shattered the record for the most points scored in Sunday's game (52 points) and picked up Most Valuable Player honors, but now the city and the Pelicans will welcome big-man DeMarcus Cousins into the fold as well.

The Vertical first reported that the Sacramento Kings send shock waves through the basketball world almost immediately following the All-Star game, when they announced the trade of DeMarcus Cousins and Omari Casspi to the New Orleans Pelicans for Buddy Hield, Tyreke Evans, Langston Galloway and the 2017 first (top-3 protected) and second round draft picks.

Cousins who is averaging 27 points and 10.7 rebounds a game this season, will team up with Anthony Davis (27.7 points & 11.7 rebounds per game) as the game's two best big men.

While most will argue the Kings pretty much "gave away" Cousins, the asking price was simply too low for most teams to pull the trigger on, including the Celtics, who at the start of the season looked like they were all in on the 'Boogie Sweepstakes' going as far as possibly including their Brooklyn (who have the league's worst record) picks in this year's draft and in 2018 (both could be a top-4 pick).

But despite the debate of could a talent like Cousins put the Celtics 'over the top' in a weak Eastern Conferance, where you only have to worry about getting by LeBron James and the Cleveland Cavaliers?

The jury seemed to be split 50/50 down the middle on that question.

Vlade Divac somewhat put all those early trade rumors to bed when he stated that Sacramento's franchise player would not be traded, but in fact be first in line to sign an extension in the summer worth of an excess of $210 million dollars through the 2022-23 season.

Let's not forget what the consensus around the league whether Cousins would be traded or not, that he has lot of 'baggage' no matter what, and even a team like the C's shouldn't even consider entertaining any offers for his services.


"I don't think Brad Stevens wants to touch DeMarcus Cousins with a 10-foot pole," said Zach Lowe in November on his podcast. "And that carries a lot of weight in Boston." [ESPN]

As reports surfaced late Sunday afternoon before the All-Star game tipped-off that the Kings were accepting offers for Cousins, Steve Bullpet of the Boston Herald reported that the Celtics weren't in the mix and were not one of the teams interested


According to text from league exec, Celtics have NOT been one of the teams trying to get DeMarcus Cousins today.
— Steve Bulpett (@SteveBHoop) February 20, 2017


So what changed between the start of the seasons and now? Why were the Kings willing to give up their supposed $200 million dollar man all of sudden when they're only a game in-a-half out of the west playoff picture?

It's simple and most Celtics fans who are pissed off today and don't want to hear or read this; but after seven seasons and not a single playoff berth, Cousins was not the answer to a decade long postseason drought out in Sacramento and the quicker they could get rid of the veteran, the better off both parties would be.

He's just not the guy to build around, at this point of his career he's a complimentary piece to the overall big picture. A good piece mind you, just not the the center-piece anymore if ever.

The Kings couldn't commit to Cousins for six more seasons, but one has to wonder why did they settle on such a small return for him?


"The Kings didn't get equal value for Cousins, but they never expected to either," said Chris Mannix of The Vertical. "Several teams, including Orlando and Boston, expressed nominal interest, while Sacramento's efforts to extract Brandon Ingram from the Lakers were rejected. Cousins, rival executives say, is a bad investment, appealing only if the asking price was minimal." [Yahoo Sports]

It seems to me the Kings let too much time pass to bank on a better return from most teams and only New Orleans, who are 11th in the West and 2.5 games behind the eighth and final playoff spot out west, decided that the time to strike and shake up the league was now, even if Cousins doesn't agree to re-sign after next season.

The Kings general manager, Divic had this to say on the decision to move on from DeMarcus Cousins:


"It was time for a change and I decided this was the best direction for the organization. Winning begins with culture and character matters. With the upcoming draft class set to be one of the strongest in a decade, this trade will allow us to build the depth needed for a talented and developing roster moving forward. We thank DeMarcus for his contributions and wish him all the best in New Orleans. The fans in Sacramento are the best in the world and we are all committed to building a team that will continue to make Sacramento proud." [Bleacher Report]

This trade was clearly a no brainer for the Pelicans to make despite the risks that come along with acquiring a 'temperamental,' 'hot-head' young-talent like Cousins. But if the Celtics were no longer or ever interested in trading for arguably the 'best big' in the game, especially considering what pieces were involved to actually make a deal happen, there has to be something Danny Ainge and Brad Stevens were not sold on.

Either way, the 'Bring Boogie to Boston' movement is over before it barely got off the ground.

Besides, if you've been paying attention, the Celtics look like they have their eye on a couple of other superstars that currently reside in Chicago and Indianapolis.

If this DeMarcus Cousins trade to the Pelicans does anything for Ainge, it only puts even more pressure on him to make a move before Thursday's trade deadline.

Will 'Trader Danny' acquire Jimmy Butler, Paul George (maybe both) or someone else?

The suspense is clearly killing me.