Celtics 112 - Jazz 104: Against the league's elite defense, C's shoot a season's best in win at Utah 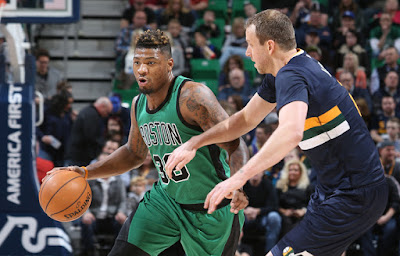 Against one of best defensive teams in the league, the Celtics cruised to a 112-104 win over the Jazz behind extraordinary scoring in what was their best shooting night of the season.

Led by Isaiah Thomas' 29 points, six Celtics scored in double figures, including Kelly Olynyk's 19 off the bench and Al Horford's 16 points to go with his 9 rebounds.

Gerald Green continued his hot shooting touch by finishing with 16 points on 7-of-8 attempts and Marcus Smart and James Young each chipped in 10.

Utah entered Saturday night's game ranked third in the league in defensive field goal percentage (43.7), while holding opponents to a league's best 95.7 points a night. However, the C's not only tacked on 112 points in Utah but also shot a season-high 59.2 percent clip.


"We know that they're a really good defensive team," Thomas said after the game. "But if we can move the ball from side to side, we can get their bigs out of the paint. And we attacked them and guys made shots."

The Celtics finished with 48 points in the paint while making 13-of-30 from behind the arc. It was a very impressive offensive outing and proof that the C's are on a hot streak despite being away from home.

Celtics have now won nine of their last ten games and remain two and a half games behind the Cavaliers for first place in the Eastern Conference. The C's will conclude their four-game road trip on Monday when they travel to Dallas to take on the Mavericks.

Celtics not only finished with a season-high shooting percentage but their reserves also combined for a season's best 50 points. Olynyk and Green certainly led the way while Young made the most of his 14:55 and Terry Rozier added five points and four rebounds.