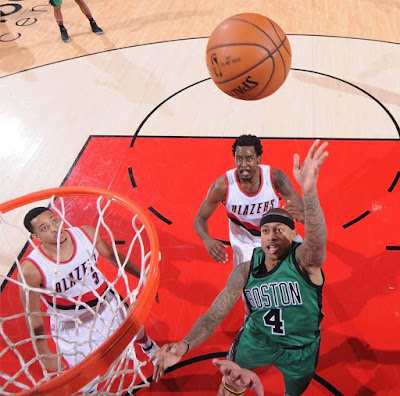 Fresh off a surprising loss to the Sacramento Kings, the Celtics looked like they were going to suffer the same fate in Portland, this time on national TV, until Isaiah Thomas woke up in the second half to lead Boston to a 120-111 victory over the Trail Blazers in a 17-point comeback on Thursday night.

Thomas led all scorers with 34 points (15 in the final period) and 4 assists, while Marcus Smart, who started in place of Jae Crowder (personal) added 18 points (8-of-13 shooting), 6 rebounds, 5 assists and 5 steals. Jaylen Brown chipped in 14 points, 7 rebounds, while Kelly Olynyk scored 13 points and grabbed 7 rebounds to lead the bench.

Gerald Green and Terry Rozier (5 assists) each finished with 11 points, respectfully, for the Celtics, who were playing on a second night of a back-to-back.

Damian Lillard led the Trail Blazers with 28 points, 7 assists and 6 rebounds. Al-Farouq Aminu finished with 26 points and 5 rebounds off the bench while C.J. McCollum added 20 points, 4 rebounds and 4 assists for the Blazers, who were playing without Evan Turner (right hand).

Portland led by as many as 15 points in the second quarter but the Celtics ended the first half on a 15-4 run to cut the deficit, 55-49, by intermission.

With under three minutes left in the game, Thomas' layup gave Boston a 106-102 lead. Brown was fouled (make both free throws) on the C's next possession after an Aminu turnover, followed by a Marcus Smart layup to put the game out of reach for the Blazers and avenge a loss from two weeks ago.

The Celtics bounced back from a 108-92 defeat against the Kings on Wednesday night, where they shot 39.7 percent from the field on only 29 made shots. Just 24 hours later, the C's made 48.4 percent (44 made baskets) of their shot attempts while limiting their turnovers to only eight, whereas the night before they committed 18.

Boston is now 34-19 on the season, and are only 2.5 games behind the first place Cleveland Cavaliers, who loss on Thursday against the Thunder.

The Celtics are 1-1 on their mini west coast trip and will look to start a new winning streak when they take on the Utah Jazz (34-20) on Saturday night. Tip-off is at 10 PM.

Isaiah Thomas has scored 20 or more points in 37 straight games and has increased his league leading fourth quarter points to 10.6, he is currently in second place in scoring, behind Russell Westbrook at 29.9 points per-contest. Damian Lillard had nothing but high praise for Marcus Smart afterwards in the locker room.


"I thought Marcus Smart was huge for them," said Lillard. "It probably won't show up on the stat sheet but he did a lot of winning things for them."