What trade assets the Celtics have to offer? 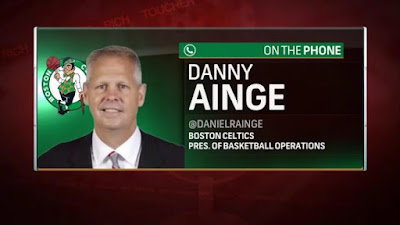 As the DeMarcus Cousins dust settles in Boston, the debates now have begun on whether the Celtics brass may have dropped the ball on not pursuing a trade for arguably the best big man in the NBA.

While lots of Celtics fans are not happy that Danny Ainge didn't at least throw his hat in the Cousins fire sale over All-Star weekend, now the time has come for 'several reports' to surface on the multitude of reasons why 'Trader Danny' was possibly never interested in Boogie Cousins to begin with.

Could it have been Brad Stevens, who had some influence on that decision not to make the move? Did the young coach simply not want to deal with a 'head-case' like Cousins?

Or, was it Isaiah Thomas, a former Sacramento King, who had some input that Ainge and Stevens valued to some degree that made them pass when the opportunity to make a play for Cousins presented itself.

According to Celtics insider; Steve Bullpett, Thomas may have been one of the deciding factors, among other reasons, on why the C's didn't take a risk on pursuing Cousins:


“The lack of a push on Cousins from the Celtics may be revealing in itself,” Bullpett wrote. “There was a time when sources insisted the Celts found him appealing, but not to the degree where they’d give up either of the first rounders owed them by Brooklyn. Now it’s fair to infer that the scouting report the C’s got from Isaiah Thomas on his former teammate was not encouraging for his fit here. In fact, sources have indicated that to be the case." [Boston Herald]

So while such reports over the next coming weeks and months begin to reveal why the Celtics were not willing to take a gamble on Cousins, the focus still should be on the trade deadline, which is 24 hours away.

The rumor mill continues to spin as names such as Jimmy Butler, Paul George, Andre Drummond and Carmelo Anthony have been linked to the Celtics over the last few weeks.

But in case you have forgotten or are just curious as to what assets Danny Ainge has to offer in any such trade, outside of his current roster (minus Isaiah Thomas and most likely Al Horford), here's a reminder of the treasure chest of draft picks for the next four seasons and rights to player.

Drafted by the Celtics in the first round of the 2016 NBA draft, 16th overall. Yabusele is playing with the Shanghai Sharks of the Chinese Basketball Association. He is averaging 21.5 points, 9.5 rebounds and 2.1 assists per game.

Drafted by the Celtics in the first round of the 2016 NBA draft, 23rd overall. Zizic is playing for Darussafaka Dogus Istanbul led by ex-NBA coach David Blatt, while averaging 10.3 points and 67.3 percent shooting from the field.

Drafted by the Celtics in the second round of the 2016 NBA draft, 58th overall. Nader is playing for Boston’s Developmental-League affiliate; the Maine Red Claws. The swingman was named to the D-League’s All-Star team after averaging 22 points, 6.0 rebounds and 4.0 assists per game so far this season.

Drafted by the Celtics in the second round of the 2015 NBA draft, 45th overall. This season Thornton is playing for Consultinvest VL Pesaro in Italy-Serie A, and averaging 11.9 points, 1.5 assists and 1.9 rebounds.