Celtics, Bulls are still in talks on a possible Jimmy Butler trade 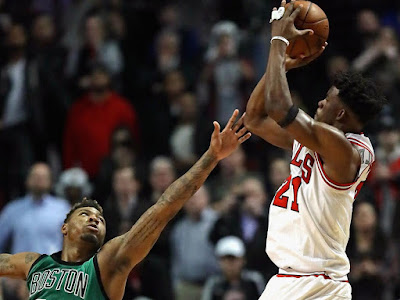 While Isaiah Thomas, Brad Stevens and the rest of the Celtics coaching staff are enjoying All-Star Weekend in New Orleans, the rumor-mill is starting to pick up as the NBA trade-deadline is only days away.

As it has been reported the last week or two, Danny Ainge has talked with the Chicago Bulls to possibly acquire the services of Jimmy Butler. But we all know why negotiations have stalled for sole reason of the Nets' pick in this year's draft that could end up being a top-3 pick that Anige refuses to give up.

But according to Adrian Wojanarowski of The Vertical, he believes that a possible deal between the Celtics and Bulls will be the top story as the deadline approaches.


"The potential of a Boston, Chicago deal for Jimmy Butler will loom over the entire week," says the Yahoo Sports NBA guru. "[They] have engaged on the potential of this trade, [but] they have not gotten far down the road on it...These are two teams that have exactly what the other wants."

It sounds like a tug-of-war over All-Star versus draft pick(s) that could ultimately lead to nothing or other pieces could be involved on both sides, only time will tell.

The real question Celtics fans have been asking; is Butler worth the Nets' pick this year or even the 2018 pick? Apparently only Ainge can answer that one if he believes his team can challenge the Cavaliers.

All the rest of us can really do is stay tuned for any major or minor moves 'Trader Danny' might have up his sleeve come Thursday afternoon.