In win over 76ers, Kelly Olynyk continues to lead the second unit 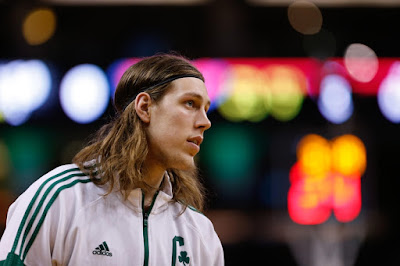 Kelly Olynyk is quietly becoming one of the Celtics' most reliable players players off the bench.

For the fifth straight game, Olynyk led the reserves in scoring. He finished with 16 points on 6-of-8 shots and 7 rebounds in the Celtics' 116-108 win over the 76ers.

His contributions on both ends of the floor has made him a leader for the second unit -- one that's playing without Marcus Smart -- and has helped fend off opposition big men from grabbing big leads while the starters are resting.

Thomas finished with a game-high 33 points, making franchise history for becoming only the second Celtics player to score at least 20 points in 40 consecutive games. Smart added 21 points and Crowder chipped in 18 but it was Olynyk's effort that not only led the bench but prevented the C's from falling behind in the first half.

He scored 10 of his 16 points in the second quarter as the Celtics and 76ers headed into halftime tied at 61. Olynyk continued to play well in the second half by pulling down rebounds and defending the paint.

He helped the Celtics keep up their offensive momentum before Thomas and the starting unit returned to close out the win in the fourth quarter.

After a slow start, including December when he averaged a woeful 6.5 points in 18.2 minutes, Olynyk has turned things around this month by making an effort on the defensive end, pulling down rebounds and finding ways to score inside the arc.

Olynyk is averaging 12.7 points in his last eight games, while shooting 56.4 percent from the floor. The biggest reason for the spike in his scoring statistics has to do with his effort in seeking high percentage shots instead of settling for 3-pointers. He's only averaging three 3-point attempts a game while averaging six shots from in or around the paint. And on Wednesday night he finished a perfect 2-for-2 from deep.

Olynyk has not only been making cuts to the basket and converting layups, he's also averaging 7 rebounds. He's made an effort in chasing down boards and boxing out big men -- a facet of his game that has always been the biggest knock about the 7-footer, who averages a 4.7 boards for his career.

Celtics have now won 11 of their last 12 games and will look to make it five straight when they take on the Bulls on Thursday night at Chicago in their final game before the All-Star break.