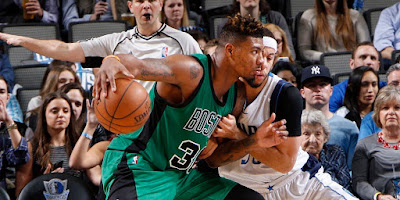 The Celtics keep losing players to injuries while also finding ways to win without them. Boston, looking to finish their mini road trip on a high-note, entered the American Airlines Center winning nine of their last 10 and losers of their last six in Dallas.

It was Marcus Smart who got hot early in front of friends and family followed by Isaiah Thomas in the fourth quarter as the Celtics held on to beat the Mavericks 111-98.

Thomas led all scorers with 29 points, 8 assists while Smart added 19 points (17 in the first half), 3 rebounds, 3 assists and 2 steals in his second consecutive start.

Kelly Olynyk finished with 15 points and 7 rebounds off the bench, Al Horford added 11 points and 5 rebounds. Gerald Green chipped in 10 points for the Celtics, who are now 36-19 on the season and two-games behind the Cleveland Cavaliers for the best record in the East.

Yogi Ferrell led the Mavericks with 20 points, 5 assists off the bench and Harrison Barnes added 19 points. Dirk Nowitzki finished with 18 points, 6 rebounds, while Wesley Matthews also chipped in 18 points and 7 rebounds for Dallas.

Boston led for almost the entire night and seemed they were going to run away with it after Deron Williams was ejected late in the second quarter after two-quick technical fouls for arguing a foul call. The Celtics would go on an 8-0 run in the final 58 seconds of the first half to lead 61-50 by intermission.

The Mavericks cut the deficit to one in the fourth quarter before the C's would go on final 12-2 run to finally put away the Mavs and end their west road trip 3-1.


"We would love to go 4-0, but things happened, " said Smart, who is a Dallas native. "But we bounced back. That's what good teams do. We're becoming a very, very great team."

The last Celtics surge was courtesy of Kelly Olynyk (7 points) on a pair of layups and a 3-ball and Isaiah Thomas (5 points) with a running layup and a contested 3-pointer.


"They've got a legitimate shot to get to the Finals with that team out of the East," said Mavericks coach Rick Carlisle afterwards. "It's a very good basketball team, so when you're playing a team on that level, you've just gotta be on it from the very beginning."

The C's will travel home to take on the Philadelphia 76ers on Wednesday night, before heading to Chicago to take on the Bulls in the final game before the All-Star break on Thursday; the second night of their back-to-back.

Jaylen Brown sat out against the Mavericks with a hip injury suffered in Saturday night's win over the Jazz, Marcus Smart started in his place. Brad Stevens picked up his first win in Dallas since becoming the coach of the Celtics, he's 2-6 overall against the Mavs. Jae Crowder (personal) returned to the lineup after being out the last two games and finished with 10 points, including a dagger 3-pointer in the last minute of the final frame to beat his former team.