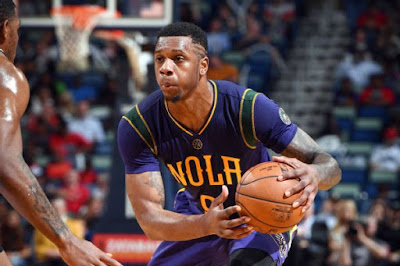 As the dust begins to settle on the Celtics not making any moves at the NBA Trade-Deadline, the only hope or saving grace is possibly acquiring a free agent via the newly waived batch of players ready to be picked up by playoff/championship contenders.

It wouldn't be the first time Danny Ainge has looked to take a dip into the buyout market pool, and there wasn't a more clear indication that the Celtics could use a boost off their bench for a deep playoff run, than Friday night at the Air Canada Centre.

In a loss in which the Celtics blew a double-digit lead to the Raptors, Toronto's two new acquisitions of Serge Ibaka (15 points, 7 rebounds) and P.J. Tucker (9 points, 10 rebounds) made an immediate impact against the C's in a 17-point comeback win.

If the Celtics want to at least remain in second place, they're going to have to keep up with not only Toronto, but the Washington Wizards and Atlanta Hawks; teams that made significant moves prior to Thursday's deadline in an effort to compete at the top of the East.

One player that could be a good addition is 6-foot-9 forward Terrance Jones, who was waived this past weekend by the New Orleans Pelicans in order to make room for DeMarcus Cousins' salary. The six-year veteran was putting together a nice 2016-17 season with averages of 11.5 points (career-high), 6 rebounds and one block per game.

According to Steve Kyler of Basketball Insiders, Jones has Boston on his radar as possible teams he might be interested in


Not in Boguts world... so no idea. Heard Terrence Jones interested in the Celtics. He is a productive player. https://t.co/IZy2O453fQ
— Steve Kyler (@stevekylerNBA) February 24, 2017


The 25-year old versatile wing has always been a Celtics killer in the past (28 points, 13.3 rebounds and 3.1 blocks per game), why not join forces and see what happens in what would be a win-win for both parties. If anything Jones' rebounding and shot blocking is exactly what Boston needs to compete with the rest of the better teams in their conference.

Jones would be relatively cheap to bring in, as he was making just over $1 million dollars in New Orleans this season.

Though the Celtics are at the league max of 15-players on their roster, Ainge would have to decide who gets waived.

Here are two other buyout options to consider, assuming they are not picked-up by any other team before March 1st.

Though only averaging 3 points this season in Dallas, he's also grabbing 8.3 rebounds per game. After being dealt to the Philadelphia 76ers on Thursday, the general consensus is that not only is he going to get bought out, but there's half a dozen teams looking to obtain his services including the Cleveland Cavaliers and San Antonio Spurs. Ainge has his work cut out for himself for trying to obtain a rebounder of Bogut's caliber.

The 14-year vet is still a serviceable player, especially for any playoff roster. After being waived by the Kings on Monday, Barnes will be sought after by a handful of teams that need some added depth for a postseason run. The forward is averaging 7.6 points and 5.4 rebounds and nearly 3 assists per game this season. He's still considered a good defender that the Celtics could benefit from acquiring for the next 20-plus games left and beyond.