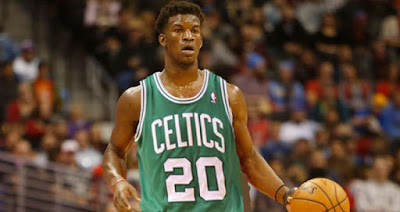 Last week the Celtics were reportedly seeking to possibly trade for either the Bulls' Jimmy Butler or the Pacers' Paul George. Nearly seven days later and a lot has occurred that could possibly change the landscape of the Eastern Conferance going forward, especially as the NBA trade deadline approaches on February 23rd.

On Tuesday Alex Kennedy of Hoopshype.com reported that Chicago would more than likely accept a 'Godfather offer' for their All-Star Jimmy Butler.

Today, a general manager told me he believes the Bulls would accept a "Godfather offer" for Jimmy Butler. But they want a lot (obviously).
— Alex Kennedy (@AlexKennedyNBA) February 14, 2017

Butler is having his best season as a pro so far putting up averages of 24.2 points, 6.3 rebounds and 5 assists per game, not to mention he has been voted in as a starter for this weekend's All-Star game in New Orleans.

However, according to the Chicago Tribune, Boston is still not willing to cough up the Brooklyn Nets' 2017 first-round pick that could potentially turn into the number one pick in this year's draft when it comes to any trade talks involving Butler.

But this recent report is not the only thing that has affected the Celtics in the last week.

The Orlando Magic sent Serge Ibaka to the Toronto Raptors for Terrance Ross and a first-round draft pick on Tuesday afternoon. The trade comes at a time where the Cleveland Cavilers, who are currently 2.5 games ahead of the Celtics for the best record in the East, announced that Kevin Love will be out 6-8 weeks with a left knee injury that will require arthroscopic surgery.

For the Raptors, who have fallen to fifth in the Eastern Conference at 32-24, have just acquired a stretch big man in Ibaka, who can protect the rim and shoot from behind the arc. If anything else, they have added another scorer in a lackluster offensive lineup as of late, to help its team make a deep playoff run.

So why weren't the Celtics looking to obtain the services of a 6'10" power forward/center who can block shots (1.6 BPG) and score (15.1 PPG) in a multitude of ways?

Well for starters, the Magic know they are more than likely not going to be able to retain Ibaka beyond this season. The veteran is on the last year of his current deal worth roughly $12.5 million, while Terrance Ross ($10 million this year) is a great role player and has two more season remaining on his contract, worth about $21 million.

So getting something in return for Ibaka now that could help you in the future is clearly what Orlando was seeking.

Toronto on the other hand, will not have the cap space to re-sign both Ibaka and Kyle Lowry (currently making $10 million) to max-deals in the offseason, even if the Raptors do make it to the East Finals or beyond. So it's a huge gamble on this 'win now' type of deal, hoping it will pay-off in the next few months.

According to CSNNE.com a potential deal for Ibaka fell through for the Celtics mainly due to the fact Danny Ainge did not want to give up Terry Rozier or any big assets of value including draft picks for possibly a short-term acquisition.

In other words, was there a guarantee that Serge Ibaka would stay in Boston beyond this season if the deal was made? Plus would the move give the Celtics an advantage over the Cavaliers in a playoff series?

The answer to both questions is:

As good as Ibaka is, he doesn't put you over the top, but the Raptors were willing to make Ross expendable for a rental player that fulfills scoring, rebounding and rim protection (despite, not being the defender he once was in OKC), especially since news of Kevin Love being out broke over the last couple of days.

If there was ever a time for the Celtics to take advantages of Cleveland's woes, its right now.

Obviously, the right type of deal would have to come in the form of 'does this put us in the Finals' category.

Either way the trade deadline can't come soon enough because the way I see it, these recent rumblings at the top of the conferance and any potential deals in the next week could change the overall shape of the playoff picture in the East.