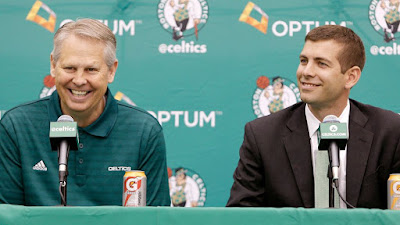 As the 2017 NBA trade deadline came and went, I couldn’t help but revert back to the single word quote from Celtics Owner Wyc Grousbeck just a few short years ago, 'Fireworks.' Now, the context of the quote can be debated but the Celtics owner was attempting to fire up his fan base on the premise that his historic franchise was building something special and going to do it in a very public way.

Fast forward to trade deadline in 2017 and I’d say these were the types of 'fireworks' that your neighbors have when they stop at the corner store and buy sparklers for the kids. The legal kind.

Boston has now gone through two consecutive deadlines without a deal of note and has a subset of Celtics faithful questioning the direction of the franchise (myself included). While it bares note, the C's have been doing a wonderful job at building a low cost winner with underrated stars and cast-offs that have blossomed into one of the fiercest teams in the NBA.

BUT, the excitement and energy this young group still leaves the realists of us a major doubt about what the pinnacle of their achievements will be. Many will argue that the Celtics are taking a careful and calculated approach that leaves them flexible and ready for opportunity, while others will argue that the glut of assets are due to expire and Boston is devaluing them by holding off on the 'big' move(s).

Danny Ainge has continually expressed the 'price is too high' to go garner a household name via trade and has spurned the opportunity to trade for the likes of Paul George, DeMarcus Cousins, Jimmy Butler, or Andre Drummond to maintain a well-stocked cabinet of draft picks and role players who have forged to become the second best team in the Eastern Conference coming out of the All-Star break. While the rebuild has gone perfectly fine for most Celtics fans, we still need to wonder:

I found myself asking this question on Twitter and rhetorically to myself in hopes that the picture would become clearer. “Don’t worry Zach, Danny and the C’s have the second best team in the East, a shot at playing for a Finals spot, multiple players who have flexible/team friendly deals, and we still have a shot at multiple top picks in the NBA Draft in 2017 and 2018!"

But the more I thought this, the more frustrated I became. While on the surface it seems like an enviable position to be in, do we think the teams who have a realistic shot at being champions in 2017 would switch places with us? I doubt it. So why aren’t we looking to be one of those teams? Are we waiting out LeBron and Golden State? Do we think this squad didn’t need more via a trade?

Or does the Celtics franchise know that it's fans are content with 'contending' and letting them (the fans) make their own scenarios with it's assets and picks the next few years?

Again, while some of those questions are rhetorical and cynical it does make one wonder “Why didn’t they do anything?”Blockbusters aside, Boston watched Nerlens Noel, Serge Ibaka, Andrew Bogut, Taj Gibson, and Doug McDermott all move in deals that Boston would have been able to trump without losing key players or draft picks (cue the Green teamer logic to why NONE of these players are worth trading for). So again, why nothing?

My conclusion came in the closing hours of February 23rd 2017 in a very simple thought: Because they don’t have to.

1. Boston is set to make the playoffs

For the third consecutive season, win 50+ games for the first time since the 'The Boston Three Party' era, likely win a round or two in the Eastern Conference playoffs, and pick a top talent in this year's draft. While the approach wreaks of content, most teams in the NBA would die to have one of those things happening for them (never mind all of them with an arrow pointing straight up on many of its player’s careers).

We may look back and see the lack of movement as a mistake or a missed opportunity but Danny Ainge and his staff understands that it does still hold a hell of a deck of cards for the next 2-3 years in regards to picks, cap space, and good, solid players under contract. It feels bad that we were promised so much but given the same scrap-fest squad for another playoff push but the pros still widely outweigh the cons.

The Celtics franchise is loaded with some of the smartest front office, sales, and marketing personnel in the sport. They have a product that is selling like Title Town Apparel t-shirts and they aren’t being asked to change it one bit. C's fans are packing the Garden every night and loving it's team as it has done so often sense the turn of the century. Boston supports winners and this situation is no different.

So what's the problem with this you ask?

Danny Ainge and the Celtics hierarchy don’t have ANY pressure on them to make a move. They like this team and feel it can be a 'contender' without mortgaging assets unless it’s on their terms. Ainge will get to maintain his record of being the best trading GM of the last 15 years and fans still get a good product that will continue to improve but will they build a champion?

The only issue with this is something I like to call risk/reward.

If Boston keeps it's team as is, we should all be able to agree that they will not win a championship (never mind multiple) without adding at least one more superstar player. Where that player comes from can be debated but what can’t be debated is the concept of time. Time in the sense of not making a deal this deadline adds pressure to making one before the close of a window that has been unprecedented in terms of draft pick capital and on-court success running parallel. Time in a sense that it's back court will be playing on expiring contracts in 2017-18 (unless Boston decides to forfeit some of its flexibility to lock them up long term). Which leads to the risk/reward.

The Celtics will have to make a choice in the near future on what 'risk' it will take. The question will be: do you want to risk your flexibility on the known commodities currently on the roster, risk your draft capital by playing the lottery and not trading the unknown and drafting the equally unknown, or take the risk of making the big deal?”

While none of the answers are easy and guaranteed, doesn’t it make sense to risk it on players who have succeeded in this league already?

Again, the Celtics are still in the driver seat after this eventless deadline. Boston is still the envy of much of the league and has as bright a future as any team that isn’t Cleveland or Golden State.

But, the clock is ticking on the versatility of this team and roster and decisions will need to be made or they will be made for them. My only request of Celtics Nation, is to remember one simple thing; those who accept mediocrity, will receive mediocrity.