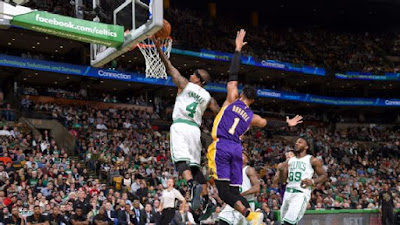 In a showdown between two of the league's most storied franchises, the Celtics defeated the Lakers, 113-107 and set the NBA record for most cumulative regular-season wins.

Isaiah Thomas scored 17 of his 38 points in the final frame to lead all scorers on 13-of-24 shooting and 4 assists. The Boston victory combined with the Toronto Raptors (30-21) losing to the Orlando Magic earlier in the evening, assures Brad Stevens and his staff to coach the Eastern Conference All-Stars in New Orleans two weeks from Sunday.

Stevens will make his first All-Star appearance in just his fourth season as the Celtics head coach.

"What's nice about it is there's no politics and there's no subjectivity," Stevens said. "(It's) what your team has accomplished and that's a credit to the players in the locker room."

Lou Williams' 21 points and 4 assists led the way for the Lakers, who were coming off a loss in a first night of a back-to-back on Thursday night. D'Angelo Russell finished with 20 points, 6 rebounds and 6 assists while Larry Nance Jr. notched a double-double of 18 points and 11 rebounds off the bench. Nick Young added 17 points including 5-of-10 from behind the arc in Los Angeles' second straight loss (fifth of their last six) and are now 17-36 on the season.

Terry Rozier's buzzer-beating 3-pointer at the end of the first quarter, gave the Celtics the 'pick me-up' they needed despite being down 30-29. Boston opened up the second quarter hitting nine of their first 11 attempts, including all 10 of Jaylen Brown's first-half points. The C's outscored the Lakers, 33-21 in the next 12 minutes to take a 62-51 lead into halftime.

Boston would never look back even after the Lakers made a run to cut into the deficit 68-61 to begin the third quarter.


That would be as close as the Lakers would get the rest of the way as Isaiah Thomas continued to pour it on, scoring in a multitude of ways.


"We stopped moving the ball. We stopped trusting each other," said Lakers coach Luke Walton. "Because of it, we don't make shots, and then our defense gets lazy."

The Celtics made nearly 48-percent of their shots including 13 from from behind the arc while limiting the Lakers to just 39.4-percent shooting on the night.

The C's will host the other team from Los Angeles on Super Bowl Sunday when they take on the 31-19 Clippers, in Paul Pierce's last regular season game in Boston.

Marcus Smart had another solid performance off the bench as he finished with 9 points, 7 assists and 5 steals. Kelly Olynyk (7 points, 9 rebounds in 16 minutes) returned from a sore shoulder, that kept him out of Wednesday night's win against the Raptors. Avery Bradley (Achilles) missed his ninth consecutive game, it is still unknown when he'll make his return but he did participate in some on-court workouts on Friday.

Isaiah Thomas was two-points shy of being the first in Celtics history to score 40 points in three straight games. Thomas is currently at 34 consecutive outings with 20 or more points, he's is now just six games behind John Havlicek for the franchise record of 40 straight games.

The odds of the Celtics and Lakers entering a game with the same win total like both teams did prior to Friday night's tip-off was 1 in 8,292.