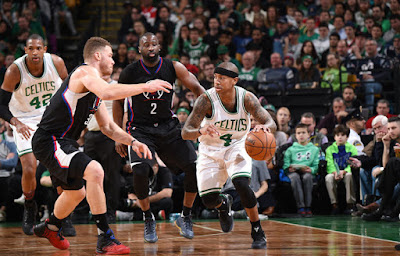 Isaiah Thomas followed up his incredible month of scoring by earning the Eastern Conference Player of the Week award.

After winning Eastern Conference Player of the Month honors, Thomas led the Celtics to a 4-0 record while averaging 37.8 points and 6.8 assists.

In two of those four games, he scored 40-plus points against the Pistons (41) and Raptors (44) and finished the week averaging a whopping 17.5 points in the fourth quarter.

Since his 52-point performance on Dec. 30, the All-Star guard has been on an unbelievable tear -- averaging 34.8 points and 6.6 assists. Throughout that span, the Celtics (14-4) are tied with the Pacers (14-4) for the second-best record have had the second best record behind the Warriors (15-3).

The C's (33-18) will look to stretch their winning streak to seven games on Wednesday when they kick off a three-game road trip in Sacramento against the Kings.