Avery Bradley to return against the Atlanta Hawks 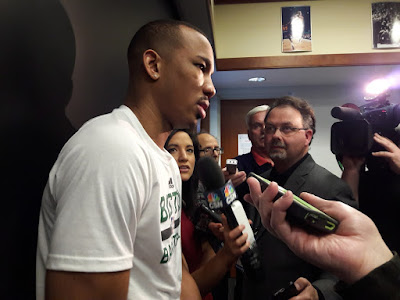 After missing 22 of the last 23 games due to a right Achilles injury, Avery Bradley is set to return to Brad Stevens' lineup on Monday night when Boston hosts the Atlanta Hawks at the TD Garden.

According to Steve Bulpett of the Boston Herald, the Celtics guard will make his first start since January 16. Bradley apparently sustained the injury in a win over the the 76ers back on January 6.

At the time, the extent of the injury was unknown until he missed the next four games and apparently further aggravated his Achilles when he returned too soon in a 108-98 C's victory over the Hornets.


Avery Bradley is back. He will start for the Celtics tonight v Atlanta, but will be on a minutes restriction.
— Steve Bulpett (@SteveBHoop) February 27, 2017


Bradley has missed 18 straight games while the Celtics are 12-6 in that span and 15-7 overall, Brad Stevens knows how important it is to slowly work his starting two guard into game shape with minute restrictions.


"Somewhere between 15 and 25 over the next four games," said Stevens "The goal is to just be feeling antsy for more. That would be a good sign moving forward."

With Jaylen Brown and Marcus Smart starting in his place at various times during the last month and a half, Stevens wouldn't say how difficult it would be to re-adjust his rotations.


"I'm just going to play him in the first couple of stints, and then, when his minutes run out, he won’t play any more," Stevens said. "It is hard if you’re trying to save minutes for the end. I'm not sure that that makes a lot of sense, with getting stiff and sitting for a long time coming off of a long layoff."

After 59 games this season, this will only be the 22nd time the lineup of Isaiah Thomas, Avery Bradley, Jae Crowder, Al Horford and Amir Johnson will play together for Stevens as every starter for the 2016-17 Celtics has missed significant time at one point or another.

With 22 games left, the Celtics find themselves with the second best record in the East at 38-21. They're going to need all the help they can get to keep pace at the top of the conferance.