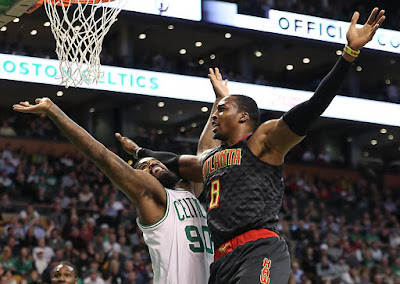 In a chippy, playoff-type atmosphere -- one reminiscent of last year's first round series between the two clubs -- Dennis Schroder gave the Celtics a flashback on how to slow down Isaiah Thomas en route to a 114-98 Hawks victory.

Atlanta outscored their opponent, 63-51 in the second half and finished shooting nearly 50 percent (48.4) from the floor while Schroder spent the night pestering his assignment in Thomas and was nearly flawless while running Atlanta's offense.

Celtics leaped out to an early 15-7 lead before the Hawks responded with an 11-0 run -- setting the tone for a very competitive first half. From the jump, Schroder gave up very little space against Thomas and rattled the All-Star point guard by staying in front of him and staying on top of his shooting hand.

Both teams respectively went on mini scoring runs throughout the half before the Hawks took a 51-47 halftime lead.

Thomas' 19 points, 7 rebounds and 7 assists led the Celtics. But suffered his worst shooting night of the season on 4-of-21 shots, including 1-of-6 from deep. Although he managed to get himself to the free-throw line (10-of-10), Thomas was ice cold from the field but remained productive in finding his teammates and pulling down boards.

Marcus Smart scored 16 points to lead the bench and Jaylen Brown finished with 15.

Avery Bradley, who's missed the last 18 straight games (Achilles), scored six points on 2-of-4 shots. He was on a minute restriction and clocked in 14:58, all in the first half.

The Celtics kicked off the second half with a quick 4-0 run, tying the game at 51 before the Hawks responded with back-to-back field goals by Millsap and Schroder.

After Howard dodged a potential flagrant foul when he wrapped his arms around Thomas' neck, Horford would later return the favor on the other end of the floor. After the official's review, Howard was issued a common shooting foul and things got interesting on the very next play.

Horford intentionally fouled Howard by pulling on his arm, Howard retaliated with a push and Horford, who was trying to get to Howard, needed to be restrained by ex-teammate Schroder and Amir Johnson.

Howard was whistled for a technical foul for the push and it wouldn't be his last of the night. After topping off a 10-4 Hawks run with a dunk, Howard pulled himself above the rim after the emphatic finish and was handed his second technical foul -- resulting in an automatic ejection.

But that didn't slow down the Hawks as they outscored their opponent, 33-24 in the third quarter and took a 13-point lead (84-71) into the final frame. The C's shot 32.8 percent through the first three quarters.

The Celtics will look to bounce on Wednesday in their second straight home game, when they take on the champion Cavaliers.

Hawks out-rebounded the Celtics, 55-40 and coerced 18 turnovers. Atlanta finished with 10 steals and scored more than half of their points (60) in the paint. Thomas (19 points) also had his streak of scoring 20-plus points snapped. After surpassing John Havlicek's franchise record of scoring 20 or more points in 40 straight games, Thomas ends his streak at 43 consecutive games.