Are the Celtics looking to trade for Jimmy Butler or Paul George? 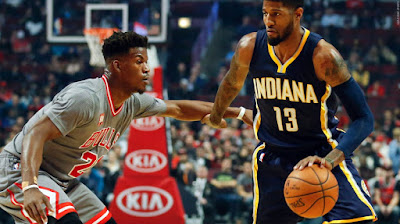 Another trade deadline approaching in the NBA, and more trade rumors have been tossed around for Celtics fans to lick their chops over. It's been over four season since Paul Pierce and Kevin Garnett were traded away for a plethora of first and second round picks for the next six drafts. Not to mention all the other trades in between (Rondo, Jeff Green and Courtney Lee) that resulted in more picks.

But Celtics nation has been waiting for the other shoe to drop because outside of Isaiah Thomas and Jae Crowder, Danny Ainge has yet to pull-off the blockbuster, franchise changing, championship contending move that the basketball world is so sure he will make.

The latest reports, just two weeks away from this month's deadline involve the Celtics looking to trade for either the Bulls' Jimmy Butler or the Pacers' Paul George.

Despite recent rumors of the New York Knicks shopping Carmelo Anthony around, the veteran forward has a 'no-trade' clause that he's only willing to waive for Cleveland, the Los Angeles Clippers and or Boston.

The Celtics have shown little to no interest in Anthony, who's 32 years-old and is making $24.5 million this season and still has two-more years remaining at just over $54 million (including a player-option in 2018-19 season at $27.9 million).

According to The Vertical's Adrian Wojnarowski, Boston prefers to deal for the latter two versus 'Melo'

Paul George is 27 years-old and has been linked to the Celtics in the past. The forward is making $18.1 million this season, $19.3 million next season and could become a free agent next summer if he doesn't pick up his player option worth $20.5 million for 2018-19. Indiana might not want to risk losing the All-Star for nothing.

Jimmy Butler has been linked to trade rumors since last summer, he's 28 years-old and will make $17.5 million this year and $58.2 million in the next three seasons with a player option after the 2018-19 season, worth $19.8 million. Considering all the turmoil in Chicago, now maybe the time to move the swingman.

Boston has the assets to trade for either Butler or George that wouldn't interrupt the core of the starting lineup and also hold a 25-percent chance to land the number one pick (C's own the Nets' pick) in this year's draft. The 2017 class is set to be a good one according to analysts.

If the Celtics make a play for Anthony, it could take them out of the free agent market come July plus possibly disrupt the team's chemistry, which currently has them sitting with the second best record in the Eastern Conferance at 33-19.

Whoever Ainge decides to trade for, the Celtics don't necessarily have to make a trade this month, but if they want to challenge the Cavaliers, it wouldn't hurt to make something happen in the next 14-days.

Either way, it should an interesting couple of weeks for 'Trader Danny'

Who would you like for the Celtics to make a deal for?