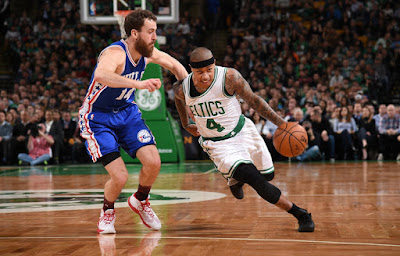 The Celtics put together a 10-0 run in the last five minutes of Wednesday night's 116-108 victory over the 76ers and crawled away with their fourth consecutive win.

Behind a balanced scoring attack, including a game-high 33 points by Isaiah Thomas -- who has now scored 20-plus points in 40 consecutive games, the Celtics' offense limited its turnovers and executed plays down the stretch.

Thomas has now tied John Havlicek (40) for the most consecutive 20-plus point games in Celtics history. A feat Havlicek reached during the 1971-72 season.

Six Celtics players scored in double figures, including Marcus Smart -- who arguably played his best game of the season.

Smart stuffed the stat sheet with 21 points, a career-high 8 steals, 5 rebounds and 5 assists. Jae Crowder finished with 18 points, 5 rebounds, Kelly Olynyk's 16 points, 7 rebounds led the bench and Al Horford added 12 points. James Young, who clocked in over 22 minutes, played extensive minutes late in the fourth quarter and finished with 10 points on 4-of-7 from the floor.

With the game tied at 101, Thomas scored an easy jump shot with 4:35 left to kick off the game clinching, 10-0 run. But it was Smart's nosediving heads up play that highlighted the fourth quarter Celtics run when he dove for a loose ball and fought with 76ers guard Nik Stauskas, forcing the turnover and jump-started the fast break possession.

From the floor, Smart passed the ball out to Crowder, who finished with a fast break layup on the opposite end of the floor.


"The last couple of weeks has been some of his best basketball," said Brad Stevens. "And we needed it. We're down a couple of bodies and he is playing at a high level on both ends of the floor."

Smart has been filling the stat sheet throughout the Celtics' four-game winning streak -- averaging 17 points, 4.7 rebounds, 4.5 assists and 4.5 steals.


"I can honestly say this is the most comfortable I have been in a Celtic uniform," Smart said. "It feels good, not only for myself but to be able to contribute to this team in other ways. It's definitely something I will continue to try and keep doing."

Smart made five steals throughout the Celtics' 10-0 run while Thomas poured in 13 of his 33 points in the final frame.

Both teams got off to a sloppy start, splitting a combined 44 turnovers. However, the Celtics' fourth-quarter offensive surge made the difference and pushed the C's to a narrow victory.

They've now won 10 of their last 11 games and will look to win their fifth straight when they take on the Bulls at Chicago on Thursday.

Isaiah Thomas also made Celtics history from behind the arc in Wednesday's win when he drained his 168th 3-pointer of the season. He's now in second place for most 3-pointers made in a single season, tying Ray Allen (168), who it took the entire 2010-2011 season to drain that many 3's.

Antoine Walker holds the franchise record for most 3-pointers made in a single season, he drained 222 3's throughout the 2001-2002 season.