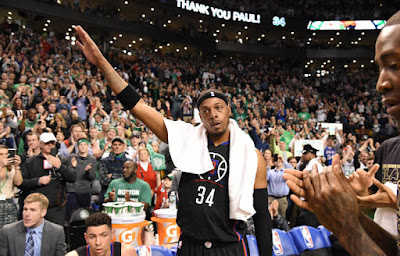 It was a perfect ending for Celtics fans.

Paul Pierce knocked in the final shot, and the Celtics won the game.

Towards the end of a 107-102 Celtics win over the Clippers, fans spent the most of the second half chanting for Pierce to come back in the game. With 19.8 seconds left, Clippers head coach Doc Rivers finally reinserted Pierce -- who had been on the bench since the first quarter -- and TD Garden went nuts.

With the game out of reach, the Celtics legend took a deep 3-pointer in front of Isaiah Thomas, and drained it.

A fitting moment by Pierce, knocking down the final shot of the game, just like he's done dozens of times throughout his 15 years with the Celtics.


"It was tough, man," Pierce said on having to sit throughout most of the game. "The fans are awesome. These are the best fans in the world. I never felt anything like this. I truly appreciate my time here. I appreciate tonight. The fans showered me with a lot of love."

Pierce, who sat on the bench since the first quarter, didn't come back into the game until the Clippers' final play, enjoyed hearing Celtics fans as they chanted for him to come back on the court.


"You know you really don't know what you meant to a team when you're out there playing," Pierce explained. "You really don't get a chance to really reflect on it. It hit me a lot tonight and I'm sure it's going to hit me a lot more when I'm done playing. This is something that I truly felt tonight."

When Rivers was asked why he put Pierce back in the game at the end of the fourth quarter, he replied:


"Because the fans made me," Rivers said. "I mean, I'm no dummy. No, I was going to anyway, but you know, you felt like the mob; every time the game's over they they kept pulling us back in and then we kept getting the game close So the objective was to win the game, obviously, and we didn't do that. So once I thought the game was in-hand to Boston, we put him back in.

"And him making that shot just -- that's just -- I don't know what the heck that is. That only happens [in a place] like here. I don't know who can sit that long and walk in on the floor and make a shot."

During the game, the home team gave their fans plenty to cheer about. Behind Thomas' 13 first-quarter points, the Celtics leaped out to a quick start by grabbing a 15-point lead.

Blake Griffin and Jamal Crawford both led their team with 23 points, Raymond Felton added 16 off the bench and DeAndre Jordan grabbed a game-high 16 boards.

The Clippers found their offensive momentum in the second quarter by cutting their deficit to two points before the Celtics went on an 11-2 run in less than two minutes. Horford, Crowder and Thomas all drained three consecutive 3-pointers and Smart followed that up with a put-back layup to push their lead to 11.

Throughout the second half, the C's kept their opponent at bay -- grasping a double-digit lead through most of the final frame.

After the game, Celtics fans stuck around and doused Pierce with another standing ovation as the former Celtics captain waved one last final time before he walked towards center court and kissed the logo.

It was Pierce's way of saying goodbye on last time.


"That was kind of pre-planned, I know I wanted to give Lucky one last kiss," Pierce said. "Lucky's been through it all with me, the ups and downs, even helped me out on a couple occasions. It was the last time I'm gonna touch this floor as a player. I'm sure I'll be back as a fan but as a player that was my last time so I kissed the floor goodbye."

With the win, the C's stretch their winning streak to seven games before heading on the road to face the Kings in Sacramento on Wednesday night. Celtics remain 2.5 games ahead of the Wizards and Raptors for second place and only two game behind of the first-place Cavaliers. Sunday was Paul Pierce's last game in Boston which happened to be on the same day he played his first as a Celtic 18-years ago [Febuary 5, 1999].