Will the Celtics trade for Jimmy Butler or Paul George? 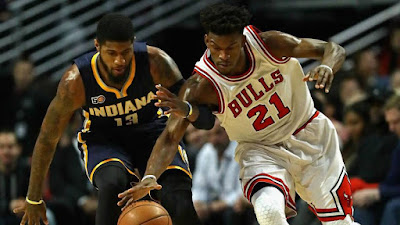 Who would you prefer for the Celtics to acquire by Thursday's NBA trade-deadline; Jimmy Butler or Paul George? Most might pick one versus the other, or one might say 'neither, I wanted DeMarcus Cousins.' Since Boogie isn't walking through that door anytime soon, one has to consider what Danny Ainge is willing to give up to in a potential move for either All-Star.

According to The Vertical’s Adrian Wojnarowski, he wrote Wednesday that the Pacers are “gauging the trade market on All-Star forward Paul George.”

The only team the Pacers are really talking to when it comes to possibly trading the 26-year-old veteran, is Boston. Larry Legend might want to strike quick before 'Trader Danny' decides to move key Celtics assets with Chicago instead, if negotiations fall through.

"The Pacers are working the trade deadline on parallel fronts: Pursuing deals that will bring talent into Indiana to sell George on signing a long-term extension -- and soliciting deal offers on George that would signal a rebuild around center Myles Turner, league sources told The Vertical.

Ultimately, the Pacers will have to evaluate the two paths and make a decision before Thursday’s 3 PM ET deadline. There’s no urgency to make a deal for George, unless the Pacers fear the Boston Celtics could ultimately provide Indiana the best possible package of assets in a deal -- and think that option could disappear if Boston makes a deal with Chicago for Jimmy Butler." [Yahoo Sports]

Indiana has an interesting decision to make because they could lose their franchise player for nothing after next season when his contact is set to expire if they don't move him soon. But if the Celtics acquire George in less than 24-hours, they would have Isaiah Thomas (barring an extension), Avery Bradley and Marcus Smart along with George all be due for new deals.

On the other side of the coin, there's Jimmy Butler and while most believe the Nets' 2017 first-round pick is what's holding up talks between Chicago and Danny Ainge, but you'd be wrong.

David Aldridge of NBA.com and Turner Sports reported on NBATV Wednesday that Jae Crowder is what has stalled a trade between both teams.

It looks like because Ainge is unwilling to offer Jae Crowder in any deal with the Bulls, they have reportedly made Jimmy Butler unavailable for the time being, but that will most likely change.


The teams that talked to the Chicago Bulls today were told, “Just about everybody on our roster is available, but Jimmy Butler is not.”

So what have learned so far?

If the Celtics trade for either Butler or George (or even Carmelo Anthony and Andre Drummond among others stars as reports have suggested), they will pretty much take themselves out of any free agency sweepstakes this summer, where such players like Gordon Hayward, Blake Griffin and Nerlens Noel, just to name a few would be available.

Ultimately, even staying pat at the deadline wouldn't be the worst thing in the world for the Celtics. At 37-20, the second best record in the Eastern Conferance, Ainge could still wait and make a move this summer for either Butler, George or anyone else