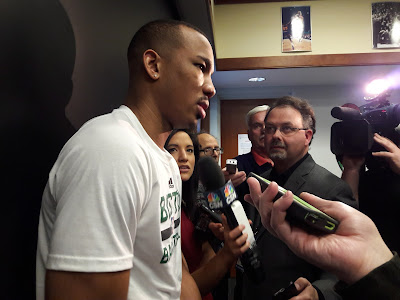 If were up to Avery Bradley, he would be playing.

But with the All-Star break looming and his team sitting comfortably in second place in the conference, Bradley and the Celtics have decided to hold off a comeback.

Bradley, who has been nursing a right Achilles injury, is expected to miss the last two games before the All-Star break against the 76ers and Bulls. It will be his 15th and 16th straight game he's missed, Bradley hasn't played since Jan. 6.


"It's frustrating," Bradley said. "I guess it's just part of the game and part of being smart. I want to play and play through it but the team advised me that this is not the time to take that risk right now and something potentially [could] happen to my Achilles or a different injury."

The Celtics, who enter Wednesday's contest winners of ten of their last 11 games, have impressively been successful without their starting shooting guard. Bradley says he's not surprised that his teammates have stepped up and that the bench has been so productive in his absence.

Bradley added that while he does wish he could play, the Celtics' decision to rest is one that he agrees with and thinks is best for him.


"It was just a decision to make together and we felt like it's the best one," Bradley said. "It's feeling really good."

While focusing on strength and conditioning, Bradley has spent a lot of time off the court but plans to use the upcoming All-Star break as an opportunity to work on his game.


"I really haven't done much," Bradley said. "I've been doing more conditioning and strengthening, upper body and lower body, just making sure I'm strong enough for when I do return. Now, we're getting the basketball stuff in, so I'm hoping over the All-Star [break], I can play some basketball and be ready for the first game."

No timetable has been set for Bradley. He is expected to be reevaluated next week before the Celtics head to Toronto to take on the Raptors on  Feb. 23.