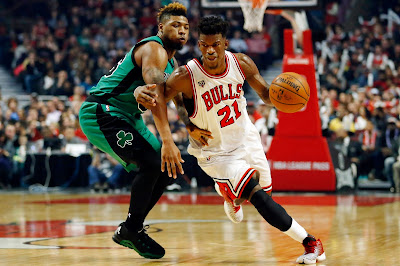 In a controversial ending on the last night in the NBA before All-Star weekend, the Celtics looked like they were on their way to win their fifth straight until Jimmy Butler hit two clutch free-throws with 0.9 seconds left to lift the Bulls past Boston in a 104-103 victory.

Butler, who finished with 29 points and seven assists, calmly sank the game-winner from the charity stripe after a foul was called on Marcus Smart for touching his elbow on a turnaround jumper as the final buzzer went off.


"He got a piece of the elbow," Butler said. "People are going to say `Aw, he didn't foul him,' but he did. So at the end of the day they made the right call."

Smart walked up the court in disbelief, while the Celtics still had one last opportunity to win despite the made free-throws. But the C's last shot came in the shape of an Al Horford (7 points, 3 assists) air-ball from the baseline, giving the Bulls back-to-back wins against two of the Eastern Conferance's better teams in Toronto and Boston.


"That's horrible when it costs you a game you should have won." said Isaiah Thomas, who also finished with 29 points and 7 assists. "That's a bad call."

For the Celtics, it was only their second lost in the last 13 games and are now 37-20 heading into the break. They remain three-games back of the first place Cavaliers and up two-games over the third seeded Washington Wizards.

Kelly Olynyk continued his hot streak as of late, scoring 17 points to go along with 7 rebounds and 4 assists to lead the second unit. Terry Rozier chipped in 11 points, 3 assists and 3 rebounds while Amir Johnson added 10 points and two blocks for the Celtics.

Boston would start off hot from behind the arc, going 10-of-14 in the first half on their way to a 58-52 lead at the break. But the third quarter told a different story for the Celtics, and they trailed 81-78 heading into the final frame.

With 1:30 remaining in the fourth, Isaiah Thomas hit two free-throws to put the C's up 103-100, but failed to convert a layup (blocked by Butler) and contested jumper on the next two possessions as Boston would not score again the rest of the way.

The ball ended up in Jimmy Butler's hand with the clock winding down to 5 seconds and the game on the line before getting a late whistle call on Marcus Smart (5 points, 4 rebounds and 3 assists) that would send the three-time All-Star to the line for the win.

The Celtics were out-rebounded 51-31 that led to 22 second chance points for the Bulls to a mere four for Boston.


"They were bigger than us at almost every position and then we didn't do a good job running down balls. So rebounding was an issue," said Brad Stevens.

Stevens (plus the rest of the C's coaching staff) and Isaiah Thomas will represent the East when they head to New Orleans for All-Star Weekend. Thomas will be a part of the Skills Challenge competition on Saturday night followed by the All-Star game it's self on Sunday.

The rest of the Celtics will enjoy a much deserved break until next Friday when they take on the Toronto Raptors for a final time this year. They'll look to tie their season series at two games a piece.

Isaiah Thomas officially holds the Celtics franchise record for the most consecutive games of scoring 20-plus points at 41, beating John Havlicek's record of 40 straight games back in the 1971-72 season. Boston finished the night with 14 made 3-pointers against the Bulls, making it the 15th consecutive game with 10 or more made 3's.