Paul Pierce discusses "Rajon being Rajon," relationship with members of 'The Big 3' 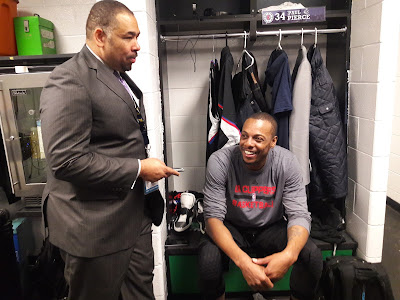 Before playing his final game in Boston, Paul Pierce answered an array of questions about his legacy, playing at TD Garden one last time and his role with the Clippers.

But when Pierce was asked about his relationship with Kevin Garnett, Ray Allen and Rajon Rondo, he smiled. And talked about how he still keeps in touch with most of them.

Garnett is "having the time of his life," said Pierce. He says Garnett's show "Area 21," a segment part of TNT's weekly Thursday night broadcast, along with being a consultant for the Clippers has kept him busy throughout his first post-retirement season.

When he was asked about Rondo, Pierce said him and Rondo "talk all the time" and that Rondo's rift with Bulls teammates Dwyane Wade and Jimmy Butler was simply, "Rajon being Rajon."


"Just like Manny being Manny, he's Rajon being Rajon," Pierce jokingly said. "Man, you know what, I respect Rajon with some of the stuff he said, truthfully. I thought it was the truth. I didn't have a problem with none of the stuff he said about Wade or Jimmy Butler because it was the honest truth. [If you saw] the next game, Wade and Jimmy they got benched because what Rondo said was right."

The Rondo conversation took a convenient segue into another member of the 2008 champion Celtics -- Ray Allen. When Pierce was asked if he thought Garnett could ever patching up his relationship with Allen, one that deteriorated after Allen left the Celtics in 2012 to sign with LeBron James, Wade and the rival Heat, he replied:


"100 percent," Pierce said. "I have no hard feelings towards Ray. That's pretty much [what] a lot of people [think because of] how things ended kind of spicy with him going to Miami. But I think over time things will blow over. We're all grown ups, we'll all get over things. I'm sure that time will come. I don't know when but like I said, I don't have any hard feelings towards Ray.

"After he won a championship in Miami, that was the last time I talked to him," Pierce said. "I congratulated him."

Will it take someone like Danny Ainge or Doc Rivers to set up a reunion between the four of you guys?


"I think it's gonna come from one of us, I think we're just gonna reach out. Maybe we'll all have a reunion on "Area 21 or something (laughs) maybe we'll meet up over there."