Andrew Bogut chooses to sign with Cleveland over the Celtics 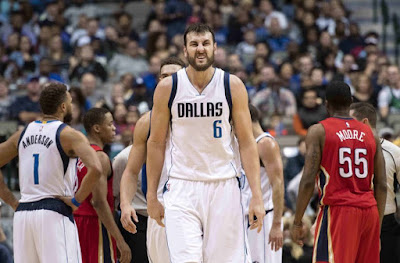 Was there any surprise that a rebounding big such as free agent Andrew Bogut didn't choose to sign with Boston over the NBA champion Cavaliers?

Maybe to some basketball fans, but to the average Celtics fan, the sarcastic "Aww shucks" seems appropriate.

According to ESPN's Marc Stein Bogut's agent, David Bauman, once his client clears waivers on Wednesday, he will fly to Cleveland and prepare for his debut with the Cavaliers by next week.


"It was a methodical process, " Bauman told ESPN. "He wanted to talk to all teams and he wanted to make sure he understood the role in each situation."

Bogut, 32, was waived by the Philadelphia 76ers on Monday after being traded by the Dallas Mavericks for Nerlens Noel. The 7-foot Australian has only played 26-games this season, averaging 3 points and 8.3 rebounds per game, but would have been a great boost for any playoff team, especially a Finals contender.


"It was a lot closer than Andrew thought going into the process," said Bauman. "He had a great talk [on Monday] for example, with Celtics coach Brad Stevens." [ESPN]

The Celtics lost out on bolstering their front-court depth by not signing Bogut. Cleveland now adds another valuable piece from the buyout market while keeping arguably their biggest competitors in the East from improving their roster.

News of Bogut choosing to sign with the Cavaliers came less than 24 hours after it was reported by Boston Globe's Adam Himmelsbach that the Celtics were still in contention to acquire the big man.


"Bogut may speak to a few Celtics players over the phone to get a gauge on how he might fit with their team, a source said." [Boston Globe]

But hey, let's look on the brightside, never mind the fact that the Cavaliers, who the Celtics will host on Wednesday at the TD Garden, have already added Deron Williams without giving up anything, but apparently Danny Ainge and Brad Stevens made such an impact on Andrew Bogut, that maybe come July 1, they could work something out long-term.


“He just ultimately felt [Cleveland] was the right fit at the right time, and it gives him the ability to be competitive for a championship,” Bauman said. “But I will tell you that Brad and Danny made a heck of an impression recruiting him, and it was a lot closer than even Andrew expected. “[He] got to know Brad and Danny a little more in the process and was really impressed, so we’re really excited for [the start of free agency]" [ESPN]

Whatever helps you sleep at night, if you're a part of the Celtics faithful. But let's not ignore the fact that Ainge could have paid Bogut at least close to $2.5 million for his services for the rest of season, plus playoffs. Out of the possible suitors for Bogut, the only other team that could have offered him more were the Houston Rockets at $3.3 million.

Guess how much Cleveland can only afford to compensate their newly acquired former champion center? No more than a cool $400,000.

Who says you have to overpay for decent talent in the NBA these days?

If you're still wondering who else should Ainge be looking at to possibly bring in for a 'deep' playoff-run via the buyout pool, Terrance Jones is available while Matt Barnes no longer is.

Barnes is on his way to Oakland to fill in for the injured Kevin Durant, who according to multiple reports, will be out at least four weeks with a left sprained MCL and bone bruise after he hyper-extended his knee in a Warriors loss to the Wizards on Tuesday.

So in all likelihood the Celtics, who have a record of 38-22 and are four games behind the first place Cavaliers, and are two-games ahead of the Washington Wizards, who just added Brandon Jennings and the Toronto Raptors, will stand pat once again for any available free agents and move forward with their current roster.


“I like our team right now,” Danny Ainge said. “Unless something really jumps out to us where I feel like we can get significantly better, I’d just assume keep our team intact.” [Boston Globe]

Mark Murphy reported, one other familiar name might be floating around, former Celtic Jared Sullinger, who was traded from the Raptors to the Phoenix Suns for P.J. Tucker, then waived last week.


"The source said that free agent forward Terrence Jones is off the table, though management hasn’t ruled out the possibility of adding Jared Sullinger — 'somewhere down the line if it is needed.'" [Boston Herald]

We shall stay tuned.