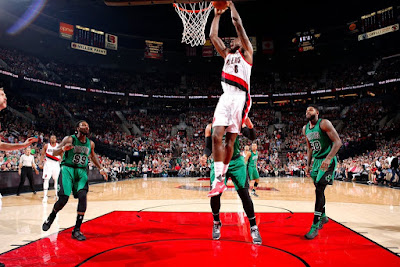 The Celtics entered the Moda Center with a 'must-win' attitude and their starting small forward back in the lineup after missing eight games.

What Boston didn't expect were for two of the Trail Blazers' widely veterans to lead Portland to a 116-109 victory and handed them their second straight road lost.

Al-Farouq Aminu turned back the clock to his college days and went off for 28 points (a career-high) including hitting six 3-pointers (also a career-high) to go along with 9 rebounds, to help Portland extend their home winning streak to six games and hold on to the sixth seed out West.

C.J. MacCollium finished the night with 17 points, and 8 assists, as Gerald Henderson chipped in 15 points off the bench. Damian Lillard struggled from the field (3-for-16) but added 14 points and dished out 4 assists for the Blazers who are now 40-36.

Isaiah Thomas led six Celtics in double-figures with 22 points, 6 rebounds and 5 turnovers, while Avery Bradley finished with 20 points. Evan Turner returned to his sixth man role and ended his night with 14 points and 4 assists. Jae Crowder (right ankle sprain) returned to the starting lineup for the first time since March 11 to record a double-double of 13 points and 10 rebounds. Jared Sullinger notched another double-double of his own with 10 points, 10 rebounds and had a team-high 5 assists in the loss.

Celtics were up at halftime 58-54 and led by as many as 12 before the Trail Blazers cut the deficit to single digits. Aminu would go on to score 12 points as Portland capped the third quarter on a 10-0 run and the game was tied 81-81

Despite Lillard being on the bench the Blazers continued to pour it on and go up 13-points. By the 3:25 minute mark in the fourth Boston got within two and missed a few opportunities to take back the lead.

With 1:08 left, Crowder found the bottom of the net on a left corner 3-ball to give the Celtics a 108-107 lead. Portland would go on to score the next nine points on a series of plays including a Thomas turnover that led to a Aminu dunk with 49.2 seconds left to go up 112-109. Boston could not convert any shots down the stretch.

"It kept us feeling better than we were actually playing and they exposed us eventually," said Stevens.

Celtics won't have much time to harp on this loss as they will face the 68-7 Golden State Warriors on Friday night at the Oracle Arena, where the Dubs have not loss in close to two seasons. Tip-off is at 10:30 on ESPN

Before tip-off the Celtics were in a three-way tie for the fourth best record in the East. This loss puts them at 43-32 (sixth) and with seven-games remaining the C's are half-a-game behind the Heat and Hornets (both are 43-31). Boston is still a game and a half behind the Hawks (45-31) for third place. Celtics will meet all three teams the last week of the season before officially clinching a seed