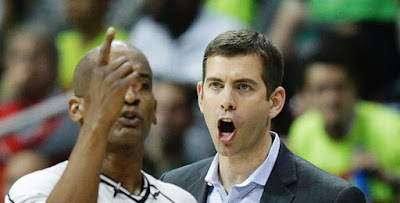 In a game where the Hawks slid past the Celtics in a 102-101 win, every play in the final minutes of the fourth quarter can dictate the outcome.

The NBA released its Two Minutes report on Sunday and disclosed four missed calls that were made towards the end of the fourth quarter of Game 1 between the Celtics and Hawks, and three of them were non-calls that affected the Celtics.

According to the report, one of the non-calls was a 3-second violation that should have been whistled against Hawks guard Kent Bazemore. The other two were a pair of illegal screens by Hawks forward Al Horford. Bazemore's infraction occurred just under the 2-minute mark (1:58), and the non-calls by Horford happened at the 55.3 second-mark and 51.1 second-mark.

Both of Horford's violations occurred in the same Hawks possession, and could have given the Celtics a bit of momentum on the other end if the play ended in a turnover. Although the Hawks were unable to score off of Horford's illegal screens, Bazemore's violation would have resulted in a technical foul against the Hawks -- giving the Celtics a free-throw and the ball.

However, the fourth call that was reported was an incorrect foul called against Hawks guard Kyle Korver on Isaiah Thomas. After grabbing a defensive rebound, Thomas was awarded two free-throws for the foul whistled against Korver with 1:54 left. Thomas made 1-of-2. So hypothetically, if the referees made the call against Bazemore at the 1:58 mark, the foul against Korver at 1:54 wouldn't have happened but if the technical foul was called, the Celtics would have had a chance to make a free-throw and convert a field goal off of the technical foul.

Although this report proves that the officials screwed the Celtics out of an extra possession in the last two minutes, it's good to see the NBA step up and call Horford out on his sketchy screens; something that he may not get away with in Game 2.

Also, in light of this report, it could effect the foul differential on Tuesday and tip the scale in the Celtics' favor.