Isaiah Thomas on Game 6: 'Other guys have to step up and make plays, that's what it comes down to' 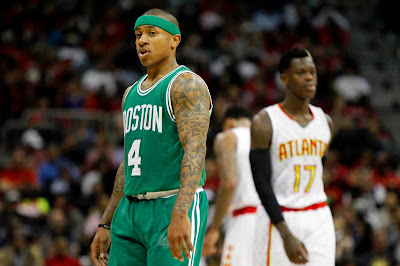 In Game 5 against the Hawks, Isaiah Thomas saw something he'd never seen before -- not since his high school playing days in Tacoma, Washington.

The Hawks' defense swarmed around Thomas on Tuesday, so much so that the Celtics All-star guard believes the Hawks aren't afraid of the rest of his team -- they believe that Thomas is the only player on the Celtics who they have to stop.


"That was their game plan. They put two or three guys on me every time I touched the ball," Thomas said. "Their game plan was to let the other guys beat us. It should be a sign of disrespect to my teammates to put two on the ball every time I have it. Other guys have to step up and make plays, that's what it comes down to."

Thomas added that it's important for him to be the floor general in Game 6 -- a role he will have to step deeper into by getting out of Atlanta's trap-defense while counting on his teammates to make shots.

Thomas, who has led the Celtics in scoring all series, shot a team-low 25 percent on 3-of-12 shooting, including 0-of-4 from deep on Tuesday. The rest of the Celtics' starting unit managed to shoot above 40-percent but that didn't stop the Hawks from catching fire on the other end of the floor -- where they shot 44 percent in a game where five Hawks scored in double figures.

But the Hawks defense sparked their offense that picked up its momentum in the second half because of what they were able to do defensively. A defensive scheme that started and ended with Thomas.

When's the last time Thomas experienced a defense like this?


"Back in high school," Thomas said. "They used to do box-and-ones and stuff. But not in the NBA."

For the first time in his NBA career, Thomas is feeling the most pressure he's ever felt. On Tuesday, the Hawks challenged any other Celtic not named Thomas to score and now that the Celtics are on the brink of elimination, it's all up to Thomas to make the proper adjustments in order to extend the series to a Game 7.

Thomas has faith in his teammates stepping up to the challenge on Thursday and is confident they will rise to the occasion,