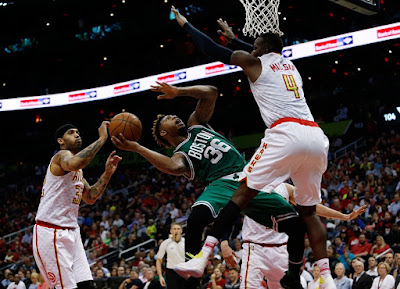 The Celtics came out flat against the Hawks in a much needed win on Tuesday night despite not having Avery Bradley or Kelly Olynyk in their lineup.

Atlanta jumped out to a 24-3 run in the first seven minutes of the first quarter and it was all downhill for Boston. The Hawks cruised to a 89-72 Game 2 win at Philips Arena to go up 2-0 in this opening round of the NBA Playoffs.

Kyle Korver had a short memory, bouncing back from a 2-point performance in Game 1, hit four 3-pointers in the opening minutes to finish his night with 17 total points on 6-of-9 shooting to go along with 7 rebounds. Al Horford also scored 17 points and grab 5 rebounds to lead the Hawks. Jeff Teague added 13 points and 6 assists while Thabo Sefolosha chipped in 12 points and 6 rebounds in 21 minutes off the bench in the win.

Isaiah Thomas led the way with 16 points on 15 shot attempts for the Celtics. Amir Johnson finished with 14 points and 8 rebounds, while Evan Turner contributed with 12 points and 5 rebounds. Terry Rozier added 10 points and 4 rebounds in 24 minutes of action off the bench for Boston who are now 0-6 in the playoffs since Brad Stevens took over as head coach in 2013.

The Hawks jumped out to a 21-point lead to start the game and held the Celtics to seven first-quarter points, the lowest scoring opening quarter in a playoff game since the shot-clock era began in 1954 and overall since the league was founded in 1949. Boston shot 3-for-23 from the field and 0-6 from behind the arc while getting six shots blocked in the process.

"I don't know what it is," said Jae Crowder, who went 1-for-9 and finished with 2 points. "But we've got to change something."

It didn't get much better in the second quarter for the Celtics as they trailed 43-28 at intermission. Boston shot 29.8 percent in the first half, and Evan Turner was their leading scorer with 8 points.

The second half was much of the same for the C's offensively, but their defense did pick up, forcing the Hawks to shoot only 33-percent. It wasn't enough to stop the bleeding and despite the Hawks finishing in the 80's, Boston shot 31.8 percent overall including 5-of-28 from behind the arc, and turned the ball over 14 times that lead to 20 fast-break points for the Hawks.

"We've got to figure it out," said Isaiah Thomas. "They're playing good team defense. But we, as a coaching staff and as players, we've got to figure out a way to make it as easy as possible. Not just for myself, but for everybody on this team."

For the second straight game the Celtics found themselves in a huge double-digit hole to climb out of, but in Game 2, they never lead once and never got within less than an 11-point differential.

Boston looks to stay alive in the series as they head back home on Friday night for Game 3. Tip-off is 8:00 PM at the TD Garden on CSNNE and ESPN2.

Stevens inserted Marcus Smart into the starting lineup to replace injured guard Avery Bradley (hamstring). The second-year guard finished with 3 points (1-of-11 shooting), 3 assists, 2 rebounds and a steal in 30 minutes of action. Birthday boy, Kelly Olynyk did not play due a sore shoulder, the same injury that kept him out of the lineup for a month earlier this season. No word if the big man will play on Friday for Game 3.