Five Reasons Why The Boston Celtics Win in Five Games 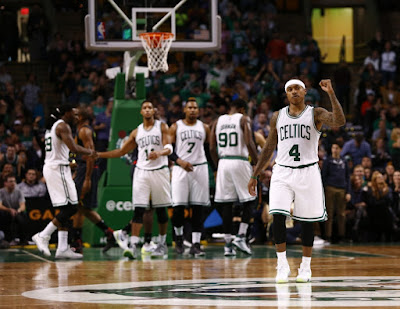 There is an overwhelming agreement among NBA reporters, analysts, and experts that the first round match up between the Boston Celtics and Atlanta Hawks will go the distance. If you've been following the analysis, it looks like there is no way these two teams that ended with the exact same record at the end of 82 games won't play out the full string of seven games.

I get where they are coming from when taking a look at this series quickly. The Celtics and Hawks both play a similar style of team ball. They both move the ball well and are very efficient on the offensive end. Brad Stevens and Mike Budenholzer are 'new wave' NBA coaches and rely heavy on the analytics to determine what to do.

Truthfully though, that is a complete and utter load of garbage. In my eyes, the Celtics are going to dominate the Hawks in this opening round series and win it in five games.

By the end of this article, I will have you on the thinking outside of the matrix and see a different outcome outside of conventional 'expert' thinking. (Don't take the blue pill!)

Fittingly enough, I have five reasons why the Celtics will dominate this first round match up against the Hawks.

The Celtics are full of these qualities. The Hawks aren't. It's that simple.
Sure, the Hawks may have a slight edge in talent but at the same time, this is a core that has been ousted from the first round three out of the last four years. On top of that, they were the best team in the Eastern Conference record-wise last year but got pushed to six games in the first round by the Brooklyn Nets. (Those same Brooklyn Nets that finished with the third worst record in the league and are aren't exactly full of heart either)

The Hawks are choke artists. They always fail in the big moments. I don't have to point out the Eastern Conference finals last year to prove my point, but I will. The Celtics got swept by the Cavs last year, which was okay. The Celtics were not a 60-win team. The Hawks laid down on the big stage. They let LeBron and co. walk all over them, and I can say with all the confidence in the world that the first round sweep of the Celtics was more competitive than that Eastern Conference Finals.

Can you defend your team's performance in big games Coach Bud?

The Hawks are an NBA team that is happy with being in the conversation. They are content with being talked about every year as a team that is in the middle of the pack. For them,  just making the playoffs is good enough for them to keep going another year. There is no pressure to win in Atlanta and they play that way when it matters most.

If you've watched the Celtics at all this year, even with the way they ended the season, no one can argue the amount of fight that this team has. They may be flat on some nights, but it is extremely rare for them to lay down. The are determined to win a playoff series, and the fight in these two teams couldn't be more different. 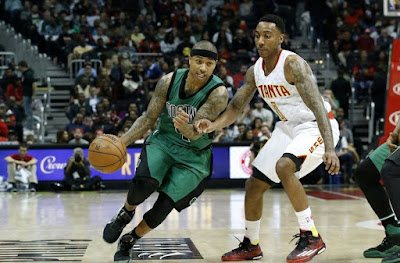 Between Isaiah Thomas, Avery Bradley, Marcus Smart, and Evan Turner the Celtics will have a distinct advantage in this series in the back court.

Thomas is the best guard on either team. In the past and especially in last year's playoffs, teams have been successful in slowing down Isaiah's offensive effectiveness by pressuring the ball and throwing double-teams to get him out of his rhythm. The blueprint on how to stop him is right there for the Hawks. It's no secret to them and neither is it to Thomas, Brad Stevens or the Celtics.You can bet that Stevens will put together a game plan to avoid that situation. On top of that, Thomas has a lot to prove this postseason.

He made the All-star team this year that was obviously a great achievement, but he wants to be 'the guy' on a winning team. Thomas spoke all year about his obsession with being a superstar in the league. If he is able to take over and win a playoff series that would push him over that plateau and erase all question marks surrounding his status as an NBA elite. Thomas will take over in this series because in his mind, he has too.

My prediction is the "Little Guy" as Tommy Heinson so affectionately refers to him will put up 25+ppg, 6+ apg, and limit the turnovers. Thomas will be in total "Chip on his Shoulder Mode" to prove all the doubters wrong. Here is the most indisputable part of my argument for why the Celtics will win the series in five games.

I don't care if you are the biggest Hawks fan of all-time, you can't dispute this fact. The Celtics bench has three players that when they are on, can and have taken over the game. You could argue Schroder could do that, but please, don't waste your breath. The  Celtics bench led by these four guys all year have been the Achilles heel to teams not as deep. The Celtics should outscore the Hawks bench every game this series, and if they don't... well, I never predicted a sweep.

Kelly Olynyk could end up being a huge factor when it's all said and done in this series. The Celtics will need him to score to help keep up with the Paul Millsap and Al Horford combo. His game is perfect for this type of series because he will draw one of those two out to defend the perimeter. That means more driving lanes for Celtics guards or wide open looks for Kelly. 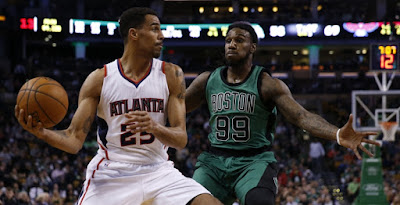 The Boston Celtics forced the most turnover per game in the NBA this year. Between Crowder, Bradley, and Smart their defense is swarming at times. They have caused havoc to even the most level-headed ball handlers this year; forcing an epic 15.8 TO's per game.

The Atlanta Hawks have been rather careless with the ball this year and are 22nd in the league in turnovers, averaging 14.5 turnovers of their own. The Celtics will absolutely capitalize on this. Stevens will unleash the hounds and force their reckless style of play on the Hawks, which as I mentioned prior don't deal with adversity very well. 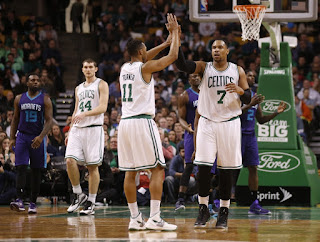 If there is one thing I know, it is that the contract-year players, usually have pretty motivated playoff performances.

These two are total x-factors for the Celtics in this series. It benefits not only the Celtics playoff chances but also the bank accounts of both Turner and Sullinger to have strong playoff performances. Both will be free agents at the end of the year, and if they can play to their absolute potential that they have shown flashes of. This series may not even go five games.

Evan Turner has always had big games against the Atlanta Hawks as a Celtic. He should be able to get his shot off at will with most of the Hawks defensive attention usually shifting towards the Celtics' other guards. Turner will probably be cashing fat checks come next season anyways, but I'm sure he knows that if he can be a reason the Celtics move on, that's only going to make his leverage a lot stronger.

Sullinger has a lot more to play for. First off, he is a restricted free agent so his ceiling on what he can make is a little lower to begin with. Secondly, there have been question marks about his fitness and consistency. Unlike Turner, he hasn't had a full season where he has answered those questions. So even though he is young, and even though he is a big, and even though I think he's going to get overpaid anyways by some team; Sullinger needs to crush it in this series.

If you still think this series will go seven, I understand your hesitation. The Hawks have Millsap and Horford; which will be tough for the Celtics to stop. However, the Celtics are ready for that next step. They are ready for a deep playoff run to validate the success they have had all year and I just can't see the Hawks slowing them down.