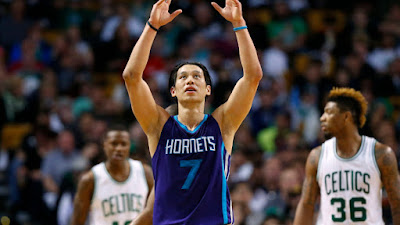 In a game with playoff implications for both teams on the line, the Hornets dominated the Celtics en route to a 114-100 win at TD Garden on Wednesday.

Isaiah Thomas and Avery Bradley each netter 17 points for the Celtics and Kelly Olynyk scored 10 off the bench, but wasn't nearly enough to hang on. Jeremy Lin scored a game-high 25 points to lead the Hornets. Kemba Walker scored 18, Marvin Williams added 16 and Al Jefferson finished with a double-double (16 points, 10 rebounds).

Led by Bradley's 11 first-quarter points, the Celtics grabbed a 28-24 lead at the end of the quarter -- but it didn't last long. Charlotte outscored the C's 39-13 in the second quarter and used a 9-3 run at the start of the third to take a 28-point lead they wouldn't relinquish.


"We laid an eight-minute egg at the end of the second quarter, and just couldn't overcome," Celtics coach Brad Stevens said. "We were up 38-32 and then I think they went on a 31-3 run, offense was bad, defense was bad, everything was poor, but that's what it boiled down to. I mean, it was an eight minute -- we laid an eight-minute egg. That's the way I look at it. That's enough against those guys when they're shooting it like that, to really hurt you."

Desperate to find his offensive rhythm, Thomas came out aggressive in the second half, scoring 10 points on five shots before his aggression boiled over at the 3:55 mark. Thomas earned a technical foul for tossing the ball at official Ben Taylor's legs in reaction to an offensive foul call. Thomas never returned to the game.

On Asian-American appreciation night, Lin dominated the Celtics, especially in the second quarter where he scored 19 of his 25 points. Bradley and Marcus Smart simply couldn't stop his dribble penetration. Lin also picked up five steals, as the Celtics seemed to drive into the paint with reckless abandon.

In the second quarter, while the Hornets were making their huge run, the Celtics looked lethargic and played incredible sloppy basketball. This is one of the only times this season that the team's effort has been called into question. After falling down big, the C's also let the refs get in their heads. Thomas got his technical foul, and Evan Turner jumped around looking like a toddler throwing  tantrum after a no-call.

With the loss, the Celtics (47-34) are now tied with the Hornets for fifth in the Eastern Conference. There are tiebreakers aplenty with all four teams seeded third through sixth capable of tying each other, but it if the C's take care of the Heat in their final game of the season on Wednesday night, they will in all likelihood be hosting a playoff game this weekend.