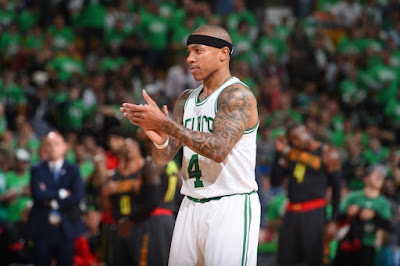 In a game where the Celtics needed a big game from their leading scorer, Isaiah Thomas didn't disappoint -- he delivered the biggest performance of his career and propelled his team to a much-needed victory at TD Garden.

Thomas scored a career-high 42 points and led the Celtics to a 111-103 victory in Game 3 of their best-of-seven series against the Hawks. Evan Turner, who was added to the starting lineup in place of Marcus Smart, stuffed the stat sheet with 17 points, 7 assists and 5 steals. Amir Johnson finished with 17 points and Jonas Jerebko, who along with Turner also earned his first start of the postseason, notched a double-double (11 points, 12 rebounds).

After getting out to slow starts offensively in their first two games of the series, the Celtics did the opposite when they ended the first quarter with a 37-20 lead. Thomas scored 16 points in the game's first 12 minutes.

He was aggressive but that aggression tempered out of control a bit when he and Schroder got into it in the second quarter. The two were very physical with each other on back-to-back possessions before Thomas swung his arm and hit Schroder in the head -- a play that will certainly be reviewed by league.

After the break, Atlanta responded with a 14-2 run and grabbed their first lead of the night, 78-77 with 1:21 left in the third quarter before the Celtics shut the door on the Hawks.

Led by Thomas' 11 fourth-quarter points, the Celtics outscored the Hawks 32-25 in the final frame to close in on their first win of the series.


"Coach made some adjustments and he just put me in a better position to be successful," Thomas said. "First and foremost, I was just in attack mode, I was trying to do whatever it takes to win this game and my teammates kept feeding me and putting me in the right spots and the shots was falling, so that's all I did. I got the easy part, my teammates helped me out a lot and coach does a great job of adjusting."

It was a historic night for Thomas. His 42-point performance puts him next to names like John Havlicek, Sam Jones, Jo Jo White, Larry Bird, Reggie Lewis, Paul Pierce, Ray Allen and Rajon Rondo as the only Celtics to score 40 points or more in a playoff game.


"I'm glad we got the win first and foremost, but that makes me feel happy, just to be in the same category as those great players," Thomas said. "I just want to follow in the footsteps of all the Celtics greats I know, that starts by winning then other than winning, winning championships. We are far from that, but I still want my name up there so I am happy about that."

The Celtics hope to carry the momentum of Friday night's win into Sunday night when they host the Hawks in Game 4 at TD Garden.

The Celtics' shot selection led them to shoot 46.3 percent from the floor, including 11-of-32 from deep. With great ball movement and with Turner and Jerebko in the starting lineup and attacking the basket -- it opened the floor up for Thomas to score in many ways. Thomas was in the zone -- hitting 12-of-24 from the field, 5-of-12 from outside and he knocked down 13-of-15 from the charity stripe.