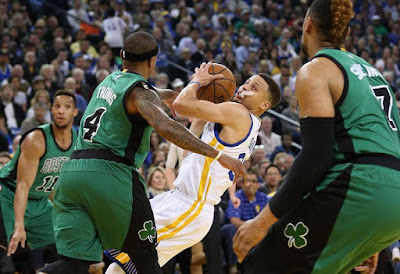 If only for one night the Celtics could play a near-perfect game against the un-beatable Warriors on their home floor.

If only for one night the basketball world would be talking about another team not named Golden State.

If only for one night...

Friday was that night, as Boston came into the Oracle Arena and snapped the mighty Warriors' 54-game home winning streak with a 109-106 victory on a nationally televised stage.

The Celtics became the first villains to take down the 'Super Dubs' in what has become a comic book storyline in Oakland since January 27, 2015. Not to mention it was an instant double-overtime NBA classic in their last meeting back on December 11. This time around there was no Steph Curry to the rescue, he actually looked human when he missed the potential game tying 3-pointer with 5.3 seconds left.

"Everyone one of them I think it's going down. But it didn't, " said Curry afterwards when asked about his potential 3-pointer that might have saved the night for the Warriors. "All thinks considered, it was a pretty good look at it...We've gotten away with some games that we probably shouldn't have won with some shots like that. And tonight it wasn't our night."

Humble even in a hard-fought defeat? I guess that's one way to look at it.

It could also be viewed as the April Fools-practical joke that no Warriors fan thought anyone could pull-off, become a reality and no one other than a sprinkle of Bay-area Celtics followers was laughing at in that arena.

While the Celtics danced off the floor celebrating their best win of the season, the commentators of the ESPN broadcast were stunned, Mike a Tommy of Comcast Sports Net New England are still most likely in a state of shock, and will be for the next week at this year's biggest 'upset' in basketball.

So how did this happen?

Well for starters let's take a look at the C's only all-star in Isaiah Thomas, who led his team in points with 22 (including a game-wining layup with 8.3 seconds left). The "Little-Guy" had not registered a point by halftime, but went off in the third quarter for 18 of his total points. Evan Turner started in place of a resting Jae Crowder and added 21 points to go along with 5 assists and 5 rebounds.

Jared Sullinger recorded another double-double of 20 points and 12 rebounds, and Avery Bradley finished his night with 15 points, 4 assists and 2 steals while playing superb defense on the 'splash bros' Curry and Klay Thompson (both shot a combined 14-of-35 from the floor).

Curry also had a great third quarter, hitting six 3-pointers (8-for-14 from behind the arc) after only scoring 6 points in the first half, finished with 29 points (9-of-19 from the field) 5 rebounds and 6 assists (can't forget his 9 turnovers as well) to lead the Warriors, who are no 68-8 on the season.

Draymond Green finished with 16 points, 9 rebounds and 7 assists (4 turnovers). Thompson struggled all night to get his shot off, scoring only 15 points and Harrison Barnes chipped in 14 points, 8 rebounds and 4 assists for Golden State, who are now 36-1 at home. 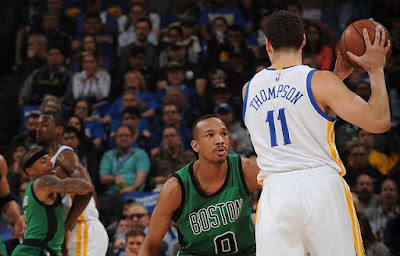 It was a game of two halves, as the first 24 minutes was all defense, the Celtics limited the Warriors to just 43 points while Curry had 7 turnovers, but the C's were shooting 36-percent to lead by only two at intermission. Both team's leading scorers Thomas (18 points) and Curry (22 points) turned it up a notch in the third quarter and the score was nearly doubled with the Celtics up 82-79 heading into the final frame.

It was only the sixth time this season Golden State has trailed after three quarters at home.

Boston would lead for most of the night, pushing it to double-digits on a Marcus Smart 3-pointer (93-83) before Golden State would make their run. With 46.9 seconds left, Shaun Livingston (8 points) hit a pair of free throws to get within two at 105-103. On the very next possession and a questionable play that found Amir Johnson (7 points) on the floor and Green literally wrestled the ball away from him, while calling a timeout (Wrestlmania is Sunday Draymond!).

Green would go on to lose the ball (karma ladies and gents) with 23.9 seconds left giving the Celtics another opportunity to extend their lead. Turner hit two free-bees before Barnes nailed a baseline 3-ball, which would be the last time the Warriors scored. After a Brad Stevens timeout, Smart found a roaming Thomas to the basket to hit the game's last layup with 8.3 seconds left.

The Celtics would hold on for the win despite Curry getting a clear look at a 3 with 5.3 left on the clock and Barnes grabbing an offensive rebound and attempting a top of the key 3-pointer of his own and missing as he tried to force overtime.

"Everybody is bummed," said Steve Kerr afterwards. Despite the execution being "really bad," the Warriors coach praised his players.

"I congratulated them. Are you kidding me? They just won 54 home games in a row. What our guys accomplished is incredible." said Kerr. "I don't know if people understand the intensity it takes and the work that it takes to put together a streak like that."

Boston was coming off of two consecutive losses against the Clippers and Blazers and are now 4-1 on the second night of a back-to-back when both games are on the road this season.

"When Curry got going in the third quarter, I thought the biggest moment of the game was us scoring consecutively when he scored," Brad Stevens said.

Say what you will about how far Boston (44-32) can go in the postseason (currently the fifth seed), but no one can take away from what they did on Friday night against the reigning MVP and NBA champions.

I mean despite it being only one night...

The Celtics, now 2-2 on their biggest road trip of the season, will look to wrap-up their west coast swing with a another win when they visit Los Angeles to play Kobe Bryant for one last time on Sunday. Tip-off against the Lakers is at 9:30 PM ET.

Celtics out-shot the Warriors 47.1 - 45.8 percent from the field. Boston out-rebounded Golden State 57-48 while forcing 22 turnover (27 points) to the C's 14 in the win. Jae Crowder did not play on Friday, but is expected to be in the lineup on Sunday night.