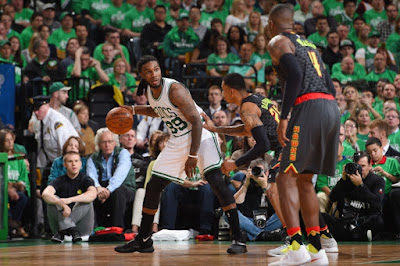 Disappointed in his shooting, Jae Crowder headed to the team's practice facility for a late-night shooting session after Friday's Game 3 victory over the Hawks.


"I wanted to see the ball go through the basket, that's all," Crowder said on Saturday at the Celtics' practice facility. "I was here 45 minutes, me and my friend, I needed a rebounder. I've done it a few times."

While most guys would have went home after a huge playoff win, Crowder was in Waltham, MA looking to find his shooting touch.


"I got here like 1, 1:30 [a.m.] last night. The win was great. I was very happy with that, but I wanted to prepare myself for Game 4," Crowder said. "It's a big game for us and I wanted to really step into my shots and be a force in my offensive game. I'm doing great on defense and guys are still applauding me on that, but I just want to lift our team up a little more in the offensive end. I just wanted to see the ball go through the hoop."

Crowder has done a terrific job in defending Paul Millsap -- arguably the Hawks' most valuable player. Millsap is averaging 8.7 points and shooting 31 percent in the series.

Along with defending, the Celtics swingman is doing a little bit of everything. He's averaging 8.3 rebounds, 3.3 assists and 2.3 steals per contest.

Despite the shooting slump, Crowder is confident that he'll be able to bounce back.

Crowder, who missed nine regular season games last month with a high-ankle sprain, acknowledged the fact that he's not 100-percent -- something that he says is more frustrating than not being able to make shots. However, Celtics coach Brad Stevens is not worried and believes Crowder is too good of a shooter to not get out of this funk.


"I believe in the law of averages and Jae's a good shooter," Brad Stevens said. "Jae's been a good shooter all year. I have not lose one iota of sleep over that, either. Keep shooting it. He's open, he's gonna be aggressive and we want him to be aggressive. He's a big reason why we're here."