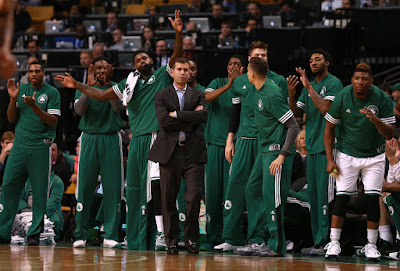 The Boston Celtics at 47-34, are tied with the Charlotte Hornets for the fifth best record in the Eastern Conference. Despite owning the tie-breaker, the C's were also tied for third place just five-days prior, where it seemed like they were in control of their playoff destiny.

After beating the Golden State Warriors nearly two weeks ago, there was nothing standing in the Celtics way to not only win 50-games but hold on to the third seed in the process.

The loss to the Atlanta Hawks last Saturday came at the worst possible time as the Celtics looked physically and mentally fatigued as they blew a 12-point lead to end the third quarter and never recovered the rest of the way.

With the third seed now out of reach, the Celtics looked to still grab home court advantage by keeping it simple and win the last two games at home beginning with the Hornets and not having to rely on other teams to win or lose.

Monday came around and in another discouraging loss where coach Brad Stevens said his team "laid an eight-minute egg" in a lopsided second quarter to the Hornets.

Now the Celtics have one game remaining with home-court in the first round on the line.

Once in cruise control after a successful five-game west coast road trip and handing the defending NBA champs their first home lost in 54-games, beating Kobe Bryant (for the last time) and the Lakers to once again clinch a playoff berth, to now having to beat the 48-33 Miami Heat (currently tied for third) to hopefully secure the fourth seed.

Though a win tonight at the TD Garden against the Heat does not guarantee that the Celtics will host a postseason game this weekend, other factors have to play out on the final night of the regular season.

In the event that Celtics were to lose to Miami, plus the Hawks and the Hornets were to both win, Boston would fall to sixth. If the C's beat the Heat and the Hawks lose, regardless of the Hornets winning or losing, the Celtics would clinch the fifth seed.

The cluster F**k that is the third through the sixth seed in the East will finally be decided in a few hours.

Until then, what do the Celtics plan on doing tonight to end a great season despite a bit of a stumble towards the finish line?

"We have to to come out and play defense, get the mojo back a little bit after a two-game slide," said Evan Turner. [ESPN Boston]

This season's Celtics have gone through almost every type of adversity as a team, it's only fair to give the Garden faithful one more fight on fan appreciation night.

"Go out with a bang," said Isaiah Thomas, who is shooting 37-percent in the last two losses. "I mean the [Celtic] legends are in town, the crowd's going to be electric. We just have to go out with a bang and play Celtics basketball, have that positive mind-set. And it starts with me." [CBSSports.com]

What a time to be alive if you're basketball fan.

Besides the Eastern playoff picture being much clearer, the Warriors look to make history by possibly winning an NBA-record 73-games and Kobe Bryant will suit up for the final time ever.

Get that popcorn ready folks.