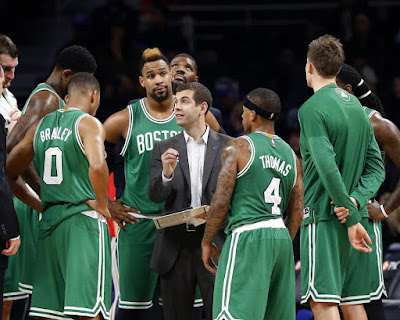 Celtics coach Brad Stevens may be tweaking his starting lineup before his team faces the Hawks in Game 3 on Friday at TD Garden.

After getting off to slow starts in both Game 1 and Game 2 at Atlanta, Stevens admitted Thursday that lineup changes may be the answer for them as the series shifts to Boston. The Celtics have been outscored 54-26 in the first quarters of their series against the Hawks. They will need to get off to a quick start on Friday to avoid falling into a 3-0 hole.


"In Game 1, it wasn't as much as execution as shot-making," Stevens said. "And then in Game 2, I thought Game 2 was a much different game overall. So from my standpoint, we look at Game 1, we look at Game 2, we look at the things we can do well, and we need to do them as well as we can for those 48 minutes that are coming up. But I think at the end of the day, we've defended how we've wanted to more often than not."

The Celtics shot 31 percent from the floor in Game 2, including 5-of-28 from deep -- their offense has missed Avery Bradley's shooting and defensively, the Hawks' backcourt got off to a quick start in Game 2. Kyle Korver went off for 5 3-pointers and finished with 17 points on Tuesday, while Jeff Teague and Dennis Schroder combined for 19.

Much like they did in Game 1, the Hawks continued to challenge the Celtics to score from the perimeter while defending the paint. Atlanta's interior defense suffocated Isaiah Thomas and Avery Bradley -- both guys struggled to convert layups against Al Horford and Paul Millsap.

Stevens turned to small-ball lineups in both games -- an indication of how the Celtics' starting lineup may look like in Game 3. Stevens replaced Jared Sullinger with Evan Turner at the start of the second half in Game 2, a possible change that we'll see on Friday.

Sullinger is having a dreadful series, so far -- averaging 6.5 points and 5 rebounds, ideally, he would be the odd man out. He played 17 minutes on Tuesday and typically on the bench when Stevens resorts to small-ball. Crowder, who's also been in a slump offensively (8 points per game) against the Hawks, has been effective on the defensive end and averaged 8 rebounds in Atlanta. Celtics lineup can't afford to not have him not start.

Inserting Turner will certainly thin the Celtics' bench production, but having Sullinger come off the bench could help him get his groove back against Atlanta's reserves. Kelly Olynyk would also be a big help for the Celtics if he's available (sore shoulder), he's still considered a game-time decision.

Jonas Jerebko is another guy who could also get the nod in place of Sullinger. At 6'10, Jerebko is an outside threat, his shooting ability (41-percent) stretches the floor and his athleticism makes him flexible, defensively. Stevens knows how important it is for the Celtics to avoid another big first-half deficit and is ready for the challenge.


"Offensively, we've got to be better," Stevens said Thursday. "Especially, again, you can't dig yourself that big of a hole early because than that puts pressure on you to make the next one and the next one and the next one. We're going to have to have guys that are not only in the right spots and executing the right ways, but also then finishing plays. And these guys have responded to that all year. So we've had our down moments. We've had our down quarters in games. And we're looking forward to tomorrow night."