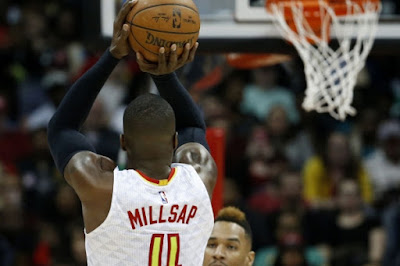 The Celtics suffered a huge blow to their hopes of grabbing the third seed in the Eastern Conference Playoff picture last night, in a 118-107 loss to the Atlanta Hawks.

It was truly a tale of two halves, last night. The first half was all Celtics, who put up 71 points before the midway point. It was a run-and-gun shoot out. The Celtics ran out of ammo, while in Atlanta the Hawks always keep one in the chamber that was in the form of Paul Millsap.

Milsap was an absolute monster last night. He kept the Hawks in it while Boston was firing on all cylinders in the first half, then took over the game in the second half to close out the night. His numbers at the end of the game were ridiculous. Millsap finished with 31 points, 16 rebounds and 5 blocks. He is the first player since the 3-point line was invented to have 15+ rebs, 5+ blocks, and 5 3-pointers in a game. 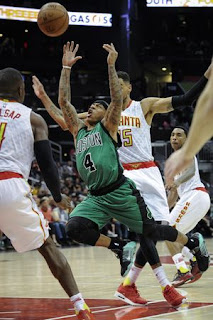 The back court duo of Jeff Teague and Dennis Schroder also caused problems for the Celtics.  They combined for 39 points, 14 assists, and were menaces on the Celtics ball handlers all night.

The Celtics went into last night's game with the ability to control their own destiny. Win out the final three games of the season and the 3-seed was theirs for them with a bow on it. They needed a strong game against the Hawks, who came into the night tied with the C's for that coveted spot in the East.

The Celtics came out of the gate like there was something to prove, but unfortunately couldn't hold on to any of that momentum in the second half. They only mustered 36 points in the entire second half and were outscored by 15. The players know they missed a golden opportunity by letting this game slip away.

"We needed this win," Isaiah Thomas said. "We were up 12 at one point. In the fourth quarter, we just couldn't make shots. It was tough for us. It was a tough game for myself. I'm very frustrated with this. It hurts."

Thomas, 18 points. should be disappointed. He knows how big this game was to hopefully avoid the Cleveland Cavaliers until the Eastern Conference Finals.

The Celtics stat line in this one is to be taken with a grain of salt. Even though they had six players in  double digits, most of that was due to the scoring barrage in the first half. They weren't able to keep that up though.

One bright spot for the Celtics on the night was Marcus Smart. It may have just been a lucky night but he went 4-6 from downtown and finished with 19 points to lead the Celtics. This could be a good sign for the Celtics. They have seen the streaky Smart turn, what is normally gut punchingly awful shooting from deep into a 10 game stretch into lights out shooting.