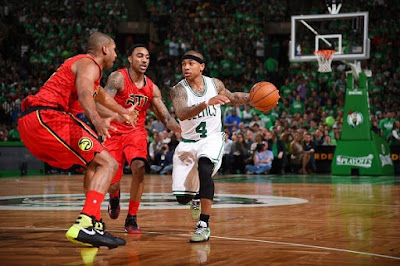 Isaiah Thomas followed up his career-high 42-point performance in a Game 3 Celtics win, with a 28-point night in Game 4 to lead the C's to a 104-95 overtime victory over the Atlanta Hawks, and tied this best-of-seven first round series at two-games a piece.

Thomas wrapped up a great weekend at Boston's TD Garden with 6 assists, 4 rebounds, 2 blocks and a steal on Sunday night. Marcus Smart lead the Celtics' second unit with 20 points, 8 rebounds, 5 assists and 2 steals in 42 minutes off the bench. Evan Turner, who started for his second consecutive game, finished with 17 points, 7 rebounds, 6 assists, and 2 blocks. Jonas Jerebko registered back-to-back double-doubles; scoring 16 points while grabbing 10 rebounds in the C's win.

Paul Millsap finally had his breakout game of the series, scoring 45 (19-of-31 shooting) points for the Hawks, a playoff career-high, to go along with his 13 rebounds and 4 blocks. Jeff Teague added 13 points and 5 assists and Kyle Korver chipped in 10 points and 8 rebounds in the loss.

The Celtics trailed by as many as 16 points midway through the third, and it looked like the Hawks were going to run away with a 3-1 series lead, until Boston made a run cutting the deficit 73-70 behind a pair of made 3-pointers by Jonas Jerebko heading into the fourth quarter. Marcus Smart would go on to score 11 straight points including a go-ahead 3-pointer to put the C's up 85-84 - their first lead of the second half.

Boston maintained a 90-86 lead with less than a minute left in regulation when Jeff Teague hit back-to-back shots from behind the arc to give Atlanta a two-point advantage. Thomas countered with a driving layup to tie at 92 with 15 seconds left.

Atlanta looked for the last shot to win the game when Teague dribbled down the clock to four seconds before he made a move towards the top of the key to let it fly, instead he lost the ball going up and Thomas grabbed it as time expired.

In overtime, the Celtics struck first when Amir Johnson (9 points, 10 rebounds) scored five straight points. Teague hit his third consecutive 3-ball with 3:44 left, and the Hawks would not score again the rest of the way. Following an Evan Turner made jumper with 1:03 remaining and the C's up 99-95, Thomas had a block on Millsap and hit a corner-dagger 3-ball on the other end.

The All-Star would go on and hit two-free throws to put away the Hawks for good to even the series.


"Isaiah did a heck of a job, the way they were guarding him, still being able to penetrate and find guys, Smart said. "I was one of the guys on the end of that. When I was that wide open and Isaiah doing all that work, I had to make the shot."

Despite the height disadvantage, the decision to have Marcus Smart, guard Paul Millsap paid dividends for the Celtics. With just over five minutes left in the fourth quarter, the second-year guard was given the 'tall task' to guard the game's leading scorer. At that point the Hawks' best player had 41 points, and Smart limited the forward to only 4 points the rest of the game.


“Guarding a guy like him and him being so hot, you just got to contain him the best you can and pressure him,” Smart said. “I tried to use my speed and my quickness against him and just tried to get up under him and make him play on his heels.

“I just gave it everything I had on the defensive end and made sure he didn’t beat us.”

The Celtics head back to Atlanta for Game 5 after protecting their home-court. Tip-off is Tuesday night at 8:30 PM ET on TNT.

Celtics shot 43-percent from the floor and held the Hawks to 37-percent shooting from the field. Boston also finished with 7 blocks on the night to Atlanta's 6. Kelly Olynyk returned to the C's lineup after missing the previous two-games with a sore right shoulder. The big man played four minutes and did not score on two-shot attempts and grabbed 2 rebounds.