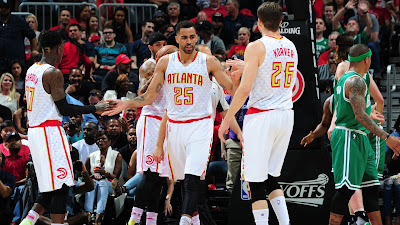 For the third game of the series, the Hawks outplayed the Celtics on their home floor -- only this time they did it in a blowout fashion as they eclipsed their opponent by 27 points and soared to a 3-2 lead in their best-of-7 series.

After taking a 47-39 lead into halftime, the Hawks used an 18-1 third quarter run to outscore the Celtics, 42-23 before heading into the final frame. Making matters worse, Celtics guard Isaiah Thomas suffered a mild strain in his left ankle less than two minutes into the fourth quarter and didn't return.

Mike Scott's 17 points off the bench led all scorers, Jeff Teague and Kent Bazemore each scored 16 and Kyle Korver finished with 13.

For only the second time this year, Isaiah Thomas failed to score in double-digits. The Hawks did a superb job of double-teaming him, forcing him into defensive traps and making him uncomfortable as he searched to find his offense.

After going scoreless in the first half, Thomas finished with 7 points on 3-of-12 shooting before he exited the game. While going up for a layup, Thomas landed awkwardly on his left ankle and began limping up the floor. Soon after the play, he committed an intentional foul and jogged towards the locker room.

Despite the slow start from both teams, the Celtics led 29-19 in the second quarter before the Hawks went on a 13-2 run -- fueled by three 3-pointers from Bazemore. Atlanta grabbed their first double-digit lead with 1:09 left in the first half and from that point it was all downhill for the Celtics.


"We were struggling to make shots," Brad Stevens said. "Yeah, it was a little frustrating. But I'm thinking, 'If we continue to guard like this, we have a chance.'"

Then came the Hawks' humongous third-quarter scoring outburst put the Celtics on their heels -- and that was when they looked like a dispirited team that was anxious and very sloppy. It was raining threes in Atlanta and every time the obnoxious Hawks PA announcer yelled "For three!" you could see the look of hopelessness and desperation on the Celtics' faces. Korver, Scott, Milsap and Dennis Schroder combined for a total of five 3-pointers in the period.

In the fourth quarter, the Hawks grabbed their biggest lead of the night -- a 34-point advantage behind Kris Humphries and back-to-back shots by Tim Hardaway Jr. down the stretch.

With the Celtics trailing 93-62 in the beginning of the fourth quarter, it was a tough loss to see Thomas -- the league's leading scorer of the playoffs -- hurt his ankle when the game looked like it was out of reach for the Celtics. However, Thomas assured the media that he will play in Game 6 on Thursday. Thomas admitted his ankle is very sore but doesn't see himself sitting out.

The Celtics will look to keep their season alive in Game 6 against the Hawks on Thursday as the series shifts back to Boston.

The Celtics committed 20 turnovers against Atlanta -- which led to 19 fast break points for the Hawks and sparked their offense throughout the second and third quarters. The Hawks scored 44 points in the paint and finished 14-of-35 from deep. In what was very uncharacteristic of the Celtics -- their sloppy play (20 turnovers) was a telling sign of how aggressive the Hawks defended their opponent. The Celtics defense let up towards the end of the second quarter and when the Hawks turned Celtics turnovers into a flurry of 3's and fast break baskets, the hole was too steep for the Celtics to climb out of.