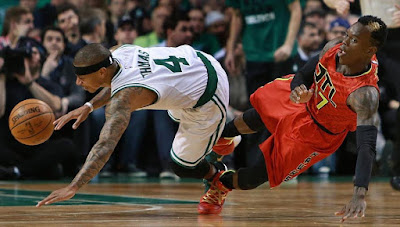 The Celtics on the brink of elimination after suffering the worst playoff lost in franchise history just 48 hours prior in Game 5 against Atlanta, dug themselves into another hole at the TD Garden on Thursday night.

This time around there was no heroic comeback or another game to play, only a 'wait til next year,' as the C's season came to an end at the hands of the Hawks in a 104-92 Game 6 loss.

Paul Milsap led six Atlanta players in double-figures as he ended his night with 17 points and 8 rebounds. Kent Bazemore and Al Horford each finished with 15 points a piece, while Kyle Korver chipped in 14 points and 9 rebounds in the series clinching win for the Hawks, who will now face the Cleveland Cavaliers in the second round.

Isaiah Thomas led all scorers with 25 points and 10 assists for the Celtics, while Jae Crowder added 15 points ad 6 rebounds. Marcus Smart (7 rebounds) and Jonas Jerebko each chipped in 13 points a piece for Boston, who have loss in the first round for a second consecutive season.

Despite Boston forcing 18 Atlanta turnovers, they struggled on the offensive end and the Hawks continued to reap the benefits.

"I think we learned from before with this team that no lead is safe, "said Al Horford. "To start the third it was important for us to get off to a good start and just keep attacking and have that mentality of keep attacking play after play."

Jae Crowder picked up his fifth foul with 8:13 to play in the fourth and at midst of a Boston rally, where the C's got within 10 points, Crowder would foul out with three-minutes left in the game and it seemed like the damage was too great to repair for the Celtics down the stretch.

"I think we should give the Hawks credit. They're better right now, " C's coach Brad Stevens said. "It pains me to say that, it's a sour ending. But they just proved it over six games. Thats just kind of how my world works. There's a scoreboard and if you're on the losing end then you're not as good as the other team."

With the lottery and the NBA draft right around the corner, it will be interesting to see what Danny Ainge will do to improve this Celtics roster that looks like it's only a few pieces away from truly being a contender in the Eastern Conference.

Until then, guess we should just enjoy the rest of the playoffs and storylines.

Celtics shot 36-percent on the night including going 7-of-32 from behind the arc. Atlanta made 51.4-percent of their shot attempts. The Hawks also had 12 blocks on the night. Brad Stevens is now 2-8 in his professional coaching career in the postseason, while Boston is 4-12 overall in their last 16 playoff games.